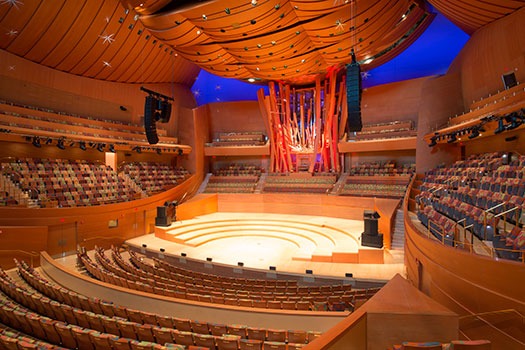 The Music Center has installed a new Meyer Sound Leopard linear sound reinforcement system in Walt Disney Concert Hall, home of the Los Angeles Philharmonic and its Music and Artistic Director, Gustavo Dudamel, as well as the Los Angeles Master Chorale and its Artistic Director, Grant Gershon. Designed by architect Frank Gehry, the 2,265-seat Concert Hall opened in 2003, winning immediate acclaim as one of the most acoustically sophisticated concert halls in the world. While the LA Phil relies on the hall’s natural acoustics to perform unamplified, an increasing number of contemporary performances require sound reinforcement. Leopard will support these shows, which include artists such as Herbie Hancock, Dianne Reeves, and Jose Gonzalez in the LA Phil’s 2015-16 season.

The latest and most compact member of Meyer Sound’s award-winning LEO Family of line array loudspeakers, Leopard possesses an extraordinary power-to-size ratio and delivers unprecedented clarity with ultra-low distortion. It treats sound with the same respect that the designers engineered into the performance space.

“Walt Disney Concert Hall is a miracle of bold design that fuses art and function,” said Deborah Borda, President and Chief Executive Officer, Los Angeles Philharmonic. “Its cutting-edge beauty symbolizes the Philharmonic’s concept of music as an art of our time and all time. Because our mission is to bring music in all its rich variety to the widest spectrum of listeners, we offer diverse genres to diverse audiences. But in whatever we do, one thing must remain constant. Whether music is traditional or new, whether or not a performance relies on amplification, the experience for artists and listeners must be of the highest quality. Meyer Sound’s Leopard enables us to realize this ideal more completely than ever.”

“Audiences discover some of the world’s most acclaimed artists inside Walt Disney Concert Hall, a performance space that has set a new standard as a place of imagination, possibility, beauty and acoustic excellence,” said Chris Christel, Director of Production for The Music Centre. To that end, we look for partners who aim for the highest standards in quality and value. By investing in a system primarily composed of Leopard system components, we made a smart artistic and economic decision.”

The system was specified for the hall by Fred Vogler, principal of Sonitus Consulting and a respected sound designer and mixer. “Historically, loudspeakers focus on level and throw, but that is not necessarily what we need in Walt Disney Concert Hall,” he stated. “This hall needs a speaker that delivers high performance and is low-profile. A speaker with linear response that is so natural sounding you can hardly tell the music is amplified. LEOPARD combines the latest technology with innovative thinking and design. The result is that it captures natural acoustics as never before, and adds no coloration to the sound. You hear what the artist on stage creates, and you hear it in every seat.”

To John Meyer, president and CEO of Meyer Sound, music is a lifelong love that drives his quest for perfect sound. His goal is to capture the essence of the music-so that audiences focus on the artistry, and not the technology that delivers the sound. “When we hear all the incredible musicians playing through our systems and see the audience completely enthralled by the performances, we feel the satisfaction of knowing we’ve done something good for the music and for everyone involved,” he said.

Meyer Sound Laboratories, founded in 1979 and based in Berkeley, Calif., has created sound solutions in the world’s most prestigious venues, including concert halls, theaters, arenas, stadiums, and houses of worship. Among the audio industry’s foremost purveyors of acoustic systems, Meyer Sound has received more than forty US and international patents and numerous technology accolades, including an R&D 100 Award.