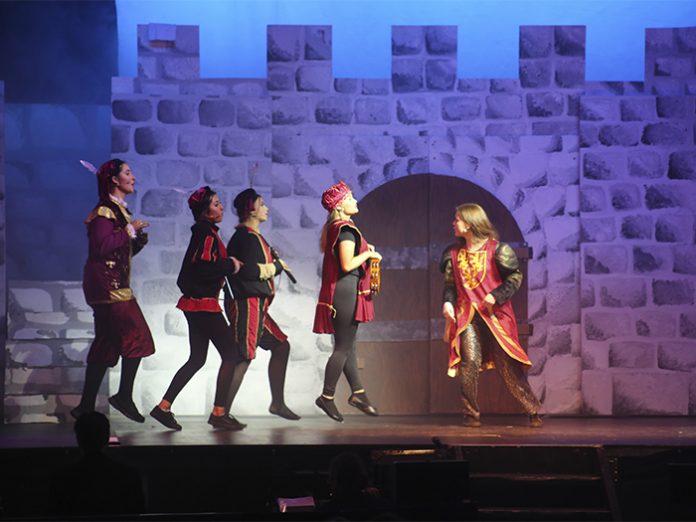 The Irish première of the hit musical comedy, Spamalot (School Edition), took place recently in County Mayo. The show, written by Eric Idle and based around the hit film Monty Python and the Holy Grail, has been a favourite of audiences all over the world since its Broadway debut in 2005. The run of five shows took place in the newly built multi-purpose hall of the Sancta Maria College in Louisburgh. Whilst the setting might suggest a modest production, limited by the technical and financial resources of a school, the reality was anything but. The college’s production of Spamalot, directed by Head of English and theatre arts specialist, Marina Rice, was able to call on the services of two west of Ireland-based companies…

EvenTech, run by John Kearney, is a leading production services company, who specialise in complete solutions for every size and scale of event. As well as supplying lighting and sound for festivals, corporate events or houses of worship across Ireland, EvenTech are great supporters of their local community, particularly in the sphere of education. When Marina Rice approached them with the idea of staging a professional-level production in Sancta Maria’s new facilities, they did not hesitate to get on board.

John was happy to be involved and supplied the show with complete production support: “Theatre is an incredibly inspiring medium for young people, and staging a production like this offers so much in the way of learning. From the artistic side to the technical aspects, a show like this is demanding and rewarding in equal measure. We were delighted to help out in our community and contribute to supporting a really worthwhile exercise.”

Spotrack, run by CEO Liam Feeney, manufactures the world’s leading remotely-operated follow-spot technology. Used across the world by leading lighting directors for a wide range of productions, Spotrack uses a patented 3D tracking system, that enables an operator in a convenient location, using a mouse or touchscreen, to remotely control any number of moving lights as follow spots. A camera-fed display gives the operator a full view of the stage and surroundings, and the system works with any moving light, any lighting console, in any performance space.

As a scalable system, Spotrack is used in all entertainment sectors, from global touring companies to, as in this case, smaller community productions. Marina Rice was acquainted with Feeney through her wider work in the theatre and in her quest to deliver a truly authentic rendition of Spamalot, enquired as to whether he could help. He jumped at the chance to get involved, and thus a system used by global superstars Metallica in huge arenas, found its way into a college in the west of Ireland.

Like John, Liam was only too pleased to help: “At Spotrack, we take education very seriously – we are involved in the training of industry professionals on a regular basis, so as well as a chance to provide some technical support in our local community, we were keen to get involved in a cross-curricular project like this to expand our own learning. Working with what is effectively a novice crew, often gives very useful insights into the way people understand and learn to use technology. This, in turn, can help inform the way we develop our products.”

The Spotrack system proved its worth in a number of ways. The nature of Spamalot demands the extensive use of follow spots to clearly highlight the contributions and movement of its different characters, helping the audience to focus clearly on the comedy.

The black box venue in which the show took place is a new multifunctional space that allows for great flexibility in a school scenario. Principal Pauline Moran, who spearheaded and oversaw its creation, was determined to provide the college with a resource she felt its students deserved:

“At Sancta Maria we have a long tradition of staging musical theatre. Whilst every year we’ve seen the most brilliant young performers in shows produced by our passionate staff, we didn’t have a dedicated facility of our own in which to showcase their achievements. The new hall gives us the chance to properly reflect the abundance of young talent we possess.”

The black box setting still posed some challenges. There were no fixed points that could accommodate follow spots, and anyway, a young and untrained amateur crew would not have been permitted to climb ladders or temporary rigging. Once EvenTech had installed the lights, the use of Spotrack meant that there were no safety issues and no compromises in the quality of the show’s delivery. The follow spot operators kept their feet very much on the ground.

Another interesting and potentially challenging aspect of the production was the participation of a cohort of European exchange students, who were temporarily studying at the college, taking part in every aspect of its life, as a means to develop and improve their English language skills. Since casting for the performances had already taken place some months before their arrival, the principal roles available to them were as technical crew. Although for general tasks, the language barrier presented few problems, for the specifics of the show, particularly where lighting cues were required to be timed with pinpoint accuracy, communication needed to be clear.

Once again, as an internationally deployed system, Spotrack offered a solution. Amongst Spotrack’s many features is Cue Me, which presents its operator with on-screen text messaging in his or her chosen language. Once trained in the system, the different operators who shared the duties for rehearsals and performances, were able to receive cues in their own language, ensuring the smooth running of the show.

Spamalot’s Irish première was a great success on every level. Playing to full houses after a week of successful production rehearsals, the show met with deserved critical acclaim, reflecting the total commitment of Marina Rice, the cast, crew and staff.

Marina Rice reflected on the success of the production: “Whilst I loved the challenge of directing Spamalot, I needed help in providing the hard-working cast with the technical backup that would really showcase their talents. I was delighted that both Liam and John agreed to come on board! With their expertise, the show was taken to another level, and the professional services they contributed in such a helpful and dedicated fashion were instrumental in the subsequent plaudits it received.”

Liam Feeney concluded: “The performances and production values of the show were of a thoroughly professional standard and it was a joy to witness the coming together of a great team. It was a hugely enriching experience all round – I’m a real believer in how multi-disciplinary, cross-curricular activities like this can help young people, especially budding technicians, gain the confidence and experience that isn’t always available to them in more rigid educational frameworks. John and the guys at EvenTech did a fantastic job and I’m pleased to report that after seeing Spotrack in action, they put in an order for four units!”