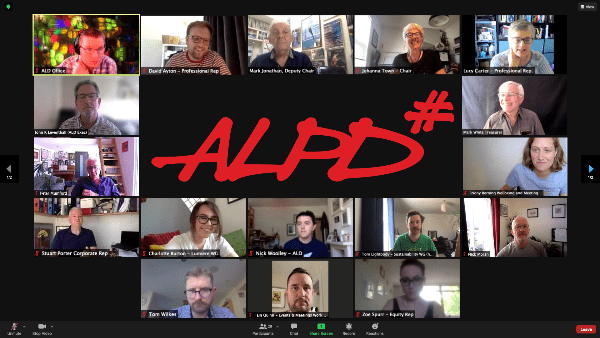 The ALD has voted in favour of a name change that demonstrates both the association’s breadth of membership and its appreciation of every lighting role in the design and production process.

The ALPD Chair, Johanna Town, explains the importance of this change of name to the association. “While the ALD, which was founded 60 years ago for lighting designers, has for some time included production electricians, programmers, lighting managers, assistant electricians, associate designers, lighting educators and students, hire companies and manufacturers, we never acknowledged it in our name. It’s a real celebration of the association’s 60th year that our name now fully respects those we represent.

“Recent years have shown us the strength we can pull on as an association. Whilst Saving Stage Lighting or working to offer support to the whole lighting industry through the Covid-19 pandemic, we have played an integral role in mobilising everyone. We know we are stronger together as an association to support everyone in the lighting team and now we have a name that says that.”

The ALPD Association President and Founder, Richard Pilbrow, said: “The ALD has had an amazingly successful run, in large part thanks to some brilliant leadership and passionate support. When we started the Association 60 years ago, we had no idea what it would become; I’m delighted it now represents the entire lighting team. Our young profession has been vastly enriched and strengthened by it. Adding the ‘P’ will dramatically increase its brightness.”

The timing of the ALD’s name change to the new inclusive, ALPD, is an indicator of how far the lighting industry has developed and matured. The ALD was brought into being in 1961 as a space where a new brand of freelancer, ‘the lighting designer’ could come together with peers for discussion and consultation about the new career path. Previously, this role had been carried out in-house by the chief electrician.

As early as 2009, the ALD opened its ‘professional’ category of membership to all lighting practitioners. The move recognised the importance of the full team around the lighting designer, giving those roles a voice and voting rights so they could have a say in their association and their industry.

Since 2018 however, when the ALD created more working groups but didn’t hear from the full range of voices, the association has worked hard to redress the balance and feeling of many that the association’s name reflected them. The campaign to ‘Include the ‘P’’ was the last vital step to demonstrate that the association is open to everyone in lighting, giving every role a voice and full support.