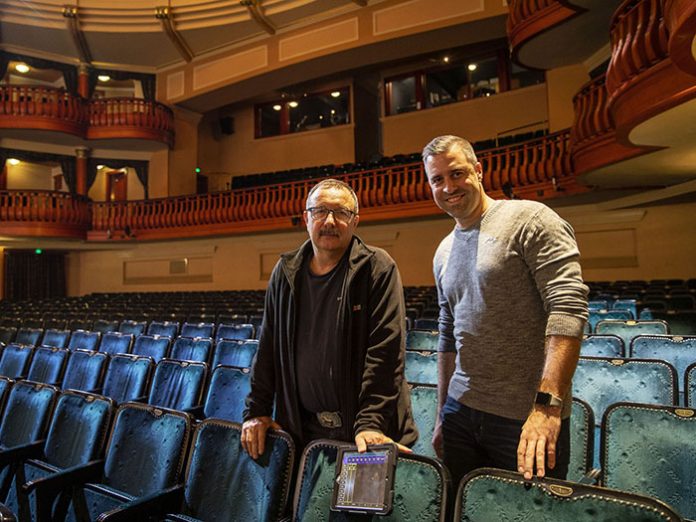 Budapest’s Thalia Theatre is in the ‘Pest’ side of the beautiful Hungarian capital and is a renowned producing and receiving house, presenting around 600 different productions per year. It is one of Hungary’s best-known venues for staging musical comedy shows on its busy three stages, the largest of which has a 520-seat auditorium.

The theatre has recently invested in Robe’s DL7S LED Profiles and Spiider LED wash lights – which are the first to be installed in a Hungarian theatre venue. The luminaires were chosen by head of lighting Karoly Bodon and his team, and delivered by Robe’s Hungarian distributor, AVL Trade.

The new fixtures are currently all in use on the main stage, and there are another six DL4S profiles on order which will be utilised for the second stage when its current refurbishment is complete.

The theatre is operated by the city of Budapest, but the new investment was financed by a combination of the district and national government.

The decision to upgrade the main stage lighting came whilst work was being done on the Winter Garden second stage, which is having a complete makeover including a new sound system being supplied by AVL Trade and a complete technical refit. It was decided that the time was also right to replace the old main stage lighting with some newer and more efficient LED options.

Previously, they had only conventional lighting in the main house, so it was a big decision to go for both LED and moving luminaires in one go.

Karoly and his crew started looking at the options.

Robe was a prominent one as they had seen them in action on some recent incoming shows and were impressed with the output and features. “The main issue was that any lights we invested in… had to be as quiet as possible. That’s where both the DL7S and the Spiider scored well” he explained.

They also like the fact that Robe is made in Europe, and that the factory at Valašské Meziříčí is only around a six-hour drive away – not essential, but a nice touch!

They love the intensity and brightness of the Spiider, and the accurate and refined colour mixing of the DL7S Profile.

He also commented that Robe was a “good” price, as they did have a budget cap.

How the fixtures would be used was also important in the selection process. The Spiiders are used for a lot of back lighting and for washing and colouring large surface areas like the stage and various sets. The high CRI of the DL7S Profile was good for key lighting and producing excellent flesh tones.

These are the first Robe fixtures as well as the first moving lights for the Thalia Theatre – the previous investment in lighting was back in 1997!

Karoly remembers this well as he started working there a decade before that… and in these 30 years he’s seen both the technology and the demands for lighting shows change dramatically.

The first time they saw Robe properly was around five or six years ago, on the booth of AVL Trade at a Hungarian trade expo. At that time, the brand presence in Hungary was still being developed by AVL Trade, who have worked hard to bring it to the forefront of people’s attention.

In 2016 a visiting international production arrived at Thalia with some LEDWash 600s and the lighting crew were all impressed when they saw these working onstage.

Karoly commented that AVL were excellent about demonstrating fixtures and conducting tests whilst they were auditioning new lights and hunting for a new LED solution, and he and eight colleagues considered options from all the major brands as well as Robe.

The first test was the noise factor, and the Robe products came top in that category. They were first tested in the dressing rooms in close proximity and then taken into the auditorium and hung in the roof.

They arrived on site in the late summer 2018, were installed and commissioned, then utilised on their first shows in October, and have been in action ever since. Most of these shows have been lit by the in-house team, so they are getting plenty of experience and discovering the true scope of the fixtures.

Many of the features haven’t yet been used day-to-day, like the gobos or pixel mapping, but they are proving great for “’general theatrical purposes, and we know there are plenty of additional possibilities when we need to step up”, Karoly stated.

With the first DL7S Profiles and Spiiders in Hungarian theatre, Thalia is enjoying leading the way, and they are also the first with a grandMA 3 console. “Robe is taking theatre applications seriously” commented Csaba Csanádi from AVL Trade, “and that’s starting to have an impact… it’s important to listen to the needs and wants and develop the right tools for this specialist discipline”.