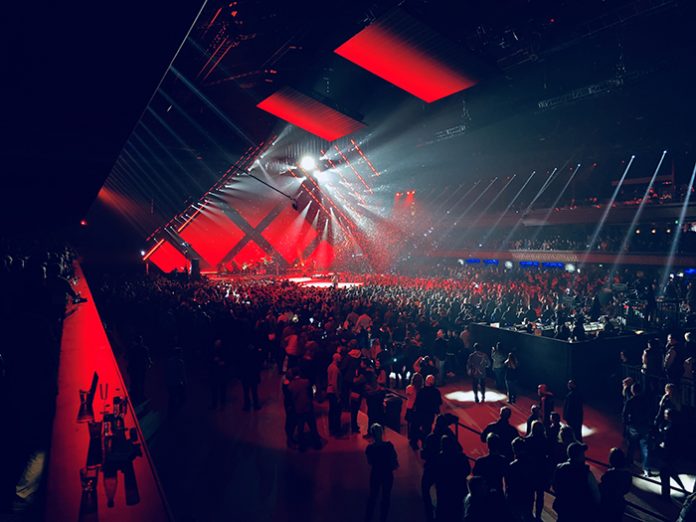 In 2015, Minneapolis Armory developer Ned Abdul purchased the building, renovated it, and converted it to an elaborate event space with room for 8,400 people.

To complete the renovations and launch the reborn Armory in style, Abdul partnered with Nomadic Entertainment to organise a series of concerts celebrating the Super Bowl, with acts including Imagine Dragons, Pink, and Jennifer Lopez, as well as parties such as Sean “Diddy” Combs’ Players Ball.

Jon Bormann of Bormann Marketing in Hopkins, Minnesota, assisted in the design of the AV systems for the Armory, networking the audio system with Dante-enabled Symetrix Radius and Prism DSPs. Advanced Light and Sound installed the video system and parts of the audio system, while Electronic Design subcontracted to handle much of the technical audio installation and DSP programming.

“It’s a huge open space, about 300 feet deep,” recounted Jon, “so you have 9 different delay tap zones, one approximately every 33 feet. In addition, there are green rooms, production rooms, executive suites, entrance halls, an outdoor rooftop patio, meeting rooms, and large halls, each of which has individually controlled zones. Everything is controlled by Symetrix DSPs feeding Lab Gruppen amplifiers, which are located in four different rooms.”

“Network and backup analog cables are run to the center of the house for the FOH left and right feeds to the house system,” Jon detailed. “An Attero Tech unD4I-L Dante-networked interface is installed at front-of-house to tap off the house mix and feed the network. Attero Tech unD610-BT and unDX210 wall plates are also located throughout the facility to route audio where needed.”

For the Super Bowl concerts, the armory rented a front-of-house system, which connected to the network via the Attero Tech unD4I-L, a flange-mount interface that supplies four analog mic/line inputs, converts the analog signal to Dante, and sends it to the Symetrix DSPs. “The long-term plan is for the Armory to have their own front-of-house system,” reports Bormann, “but in the meanwhile, they can bring in any rental system and easily connect it to the network using the Attero Tech box.”

Once the audio is in the Dante network, the Symetrix DSPs route it to 20 Lab Gruppen amps. “The Lab Gruppen amps drive Tannoy delay and fill speakers throughout the facility,” explained Bormann. “In all there are 100 Tannoy CMS5DCBM ceiling speakers, 20 AMS8DC surface-mount speakers, and 30 AMS5DC surface-mount speakers. The Dante network links all of the locations.”

Adjusting the delay taps for the Super Bowl concerts went amazingly quickly with Symetrix’ SymVue software. “When the contractors set up the sound system, they set the delay taps as fast as the guy could carry his microphone and shoot it,” Jon confirmed.

“In just 10 or 15 minutes, the Electronic Design technician used SymVue to tweak the delays in eight different zones for the Super Bowl PA setup.”

Jon also aided in designing the elaborate video systems, which includes a pair of 225-foot-long by 2-foot-high, direct-view, Delta/Vivitek LED ribbon displays running the length of the building on either side. These displays were in continuous use throughout the five days of Super Bowl events, adding significantly to the impact. Four Delta/Vivitek outdoor LED signs enhance the outside of the building. A Purelink VIP-300 AV over IP system routes 10 AV sources including live camera feeds to a Vivitek laser projector in the main lobby and 40 flat panel displays located throughout the facility.

“Everyone worked hard for five days straight, testing and making sure everything worked for each artist,” Jon concluded. “It was exhausting, but our systems performed very well. With the Symetrix DSPs managing the fill and delay systems, we were able to achieve excellent coverage, intelligibility, and output that matched the concert level output from the main stage rental system.”