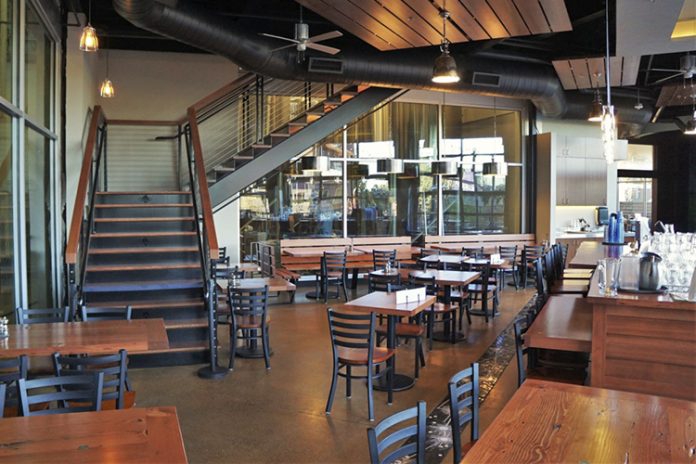 Established in 2012, Worthy Brewing has been distinctive from the start, with the capacity to brew 60,000 barrels of craft beers and a beer garden-patio featuring live hops plants. (Worthy conducts hops breeding research on site.) Patrons can party in the 20-table Hop Mahal banquet space and visit the Beermuda Triangle, an extension of the main dining room that serves food sourced from local suppliers. A stairway leads to the mezzanine level, home of the Star Bar.

Most innovative of all is the Hopservatory, a separate column structure with a spiral staircase topped by a small observatory with a telescope. Visitors can view the stars and enjoy tours hosted in conjunction with the Oregon Observatory at Sunriver. You enter via the Transporter Room at the base of the column, which is equipped with three TV kiosks and decorated with space- and garden-themed art and a mosaic floor.

Each of these spaces has different audiovisual needs, so Tony Sprando, owner of Bend, Oregon, systems integrator Audio Visual Bend, designed a multi-zone sound system for Worthy Brewing that is managed with three Symetrix Jupiter-series DSPs. “We’re using two Jupiter 8s and one Jupiter 4,” Tony said. “One Jupiter 8 distributes music from a Pandora Mood player, and it feeds the Beermuda Triangle bar, the bathrooms on the first and second floors, and the mezzanine level. By using the Jupiter 8 to create multiple zones, instead of the more common approach of having one big zone, the client can have customized music and applications in every space, and we don’t need a volume control in each room.”

The second eight-in, eight-out Jupiter 8 is for the Hop Mahal banquet hall. “The banquet hall is a wing addition where they can have meetings and presentations,” Tony added. “Although it’s one big space, we divided the front and rear of the hall into two zones to eliminate feedback issues and enable custom volume settings. We’ve also provided multiple inputs for microphones, laptops, a cable box, and so on.”

Tony dedicated the four-in, four-out Symetrix Jupiter 4 DSP to the Hopservatory building. “The Jupiter 4 manages three zones because the dome observatory, the control room, and the kiosks in the Transporter Room are completely different applications,” he detailed. “You have people mingling in the Transporter Room at the bottom level, watching the three TVs. The second zone sends music to a control room to keep the person there from getting bored. The third zone provides spacey prerecorded music you can enjoy in the observatory while looking through the telescope. I’m using a BrightSign media player for streaming content, video, images of outer space, and the prerecorded music.”

The Audio Visual Bend team installed Symetrix ARC touch panels in the control room, as well as Symetrix’ ARC-WEB browser interface, and every zone is broken out with a name, so the brewery staff can easily call up the Pandora app or BrightSign player, change the channel, and control the volume. “The Symetrix programming interface is beautiful and simple, and it looks and works the same as it does on the ARC control panel,” observed Tony. “I don’t have to send my guys for a week of training.

Symetrix makes setting up and using their DSPs easy, which also cuts down on installation costs. We specialise in commercial audiovisual, and we use a lot of Symetrix DSPs because Symetrix gets it.”