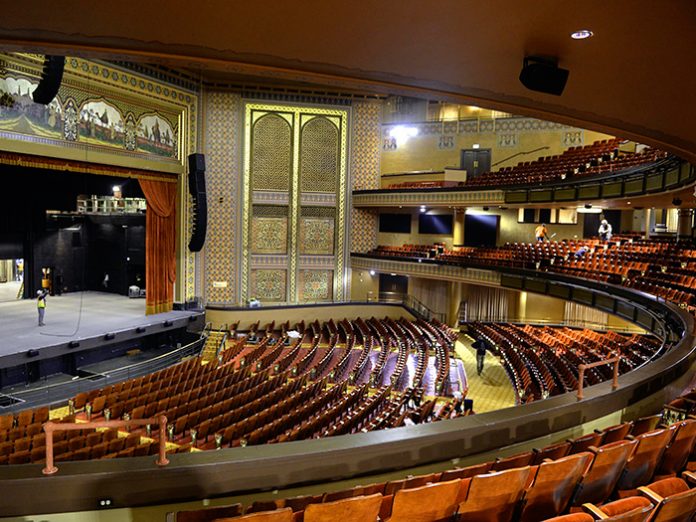 Built at the Southwest corner of Richmond’s Monroe Park in 1927 and originally called The Mosque, the Altria Theatre received a $5 million makeover and a new name-The Landmark-in 1994-95. In 2014, the theatre was renamed the Altria as part of a far more extensive $50 million renovation that included an impressive new sound system. A breathtaking architectural gem, the Altria Theatre is the largest performing arts theatre between Atlanta and New York, with a seating capacity of 3,565. The Altria also offers an 18,000-square-foot ballroom that holds 1,100 people and seats 600.

Designed by Jaffe Holden in collaboration with the Richmond branch of global venue managers SMG, and installed by Professional Audio Designs of Wauwatosa, WI, the Altria Theater’s new sound system is based on four Symetrix Edge DSP units, with additional outputs supplied by two Symetrix xOut Dante-enabled analog expanders. “I’ve been using Symetrix products for more than eight years,” begins SMG Systems Engineer Hayden Nebus. “I have 19 Symetrix DSPs right now. They sound phenomenal but the biggest factor for me is reliability.”

Symetrix’ toolkit and value, Nebus asserts, are second to none. “You get a first order and a second order all-pass filter, and the second-order filter has a variable Q,” he details. “I can take a Smaart measurement, pull it into my FIR coefficient calculator, and import my FIR filter straight into the Symetrix DSP. Programming with Symetrix’ Composer software is more straightforward than any other open architecture DSP. And the value can’t be beat: Symetrix Radius and Edge DSPs are great values, and the Prism provides amazing DSP horsepower per dollar.”

The Edge processors control a d&b Audiotechnik sound system with a dozen full-range V-series cabinets and two flown subwoofers per side, plus a centre hang of ten V-series cabinets and two subwoofers. The system includes front fills and up fills, and the balconies are handled by a mix of delay speakers, divided into three rings: one for the orchestra level, one for the first balcony area beneath the second balcony, and an over-balcony ring.

A Symetrix ARC system is provided for control. “The ARC system is beautiful,” praises Nebus. “It’s modular and expandable and you can make it do whatever you want. It gives you concise, simple, idiot-proof user controls for house managers and stage managers.”

Nebus is especially enthusiastic about a processing feature he created for the Altair Theatre. “My favourite part of that Symetrix rig, other than how gorgeous it sounds, is the ‘virtual babysitter’ I built into the processing. On all main PA outputs, I have threshold detectors and counters. Every time the output reaches -0.5 dBFS, the counter ticks. There’s a control screen with all the PA output meters, and each has a counter box above it that displays the corresponding threshold count. The counters get reset regularly, so I can tell you how many times you’ve clipped the rig, or come within 0.5 dB of clipping, since soundcheck began, and when it last happened.”

With his many years of experience, Nebus has great confidence in Symetrix processors. “With Symetrix DSPs, I know we’re getting the right tools, I know they will perform reliably, and the value can’t be beat,” he states. “Symetrix is the bleeding edge of audio processing.”