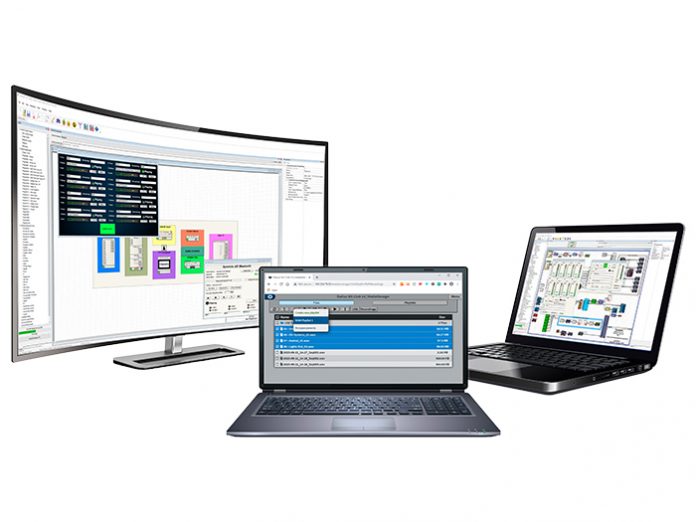 Lua Scripting — Composer 8.0 has been enhanced with Lua scripting which allows users to create custom Intelligent Modules for Composer. These Intelligent Modules allow the software to control and monitor any device that can be controlled by a third-party control system or provide system logic functionality which previously required large and complex logic programming.

For example, a council chamber audio system could be programmed so that as each person presses their mic button to speak, they’re placed in a queue. When each person is finished speaking, the mic of the next person in the queue is automatically unmuted and their indicator LED illuminated. This can be accomplished with logic programming, but it requires large, very complex combinations of objects. Implementing the same functionality with Lua scripting is a simple task that can be programmed and tested in a few hours.

Radius NX AEC Enhancement – The Acoustic Echo Cancellation (AEC) cards for the Radius NX have a new configuration option that increases the total number of AEC channels when using discrete AEC references. When processing AEC, the AEC channels in each room need to receive an AEC reference signal specific to that room which presents an increased processing load for the DSP chip.  With Composer 8.0 the Radius NX with AEC-2 card is now capable of up to 12 channels of simultaneous AEC. This enables a single Radius NX to powerfully manage as many as 12 different rooms. The increase in AEC capability may also be realized in existing installations where Radius NX DSPs with AEC cards have been installed, requiring only a firmware update. The Radius NX with AEC-1 card is now capable of processing 6 discreet AEC references.

Each audio playback module in the Radius NX can include 1 to 8 channels of audio up to a combined total of 8 tracks per Radius NX. Playback modules are individually controlled for manual or automatic playback, track/playlist selection, loop, shuffle, repeat, and auto start. Support is provided for multi-channel audio files including LCR, 3.1, 5.1, and 7.1 recordings.

Total audio playback time for the Radius NX is dependent on the size of the USB drive being used. A 512GB drive can provide over 1600 hours of CD-quality playback for less than $75 and there are no fees to activate or enable playback functionality.