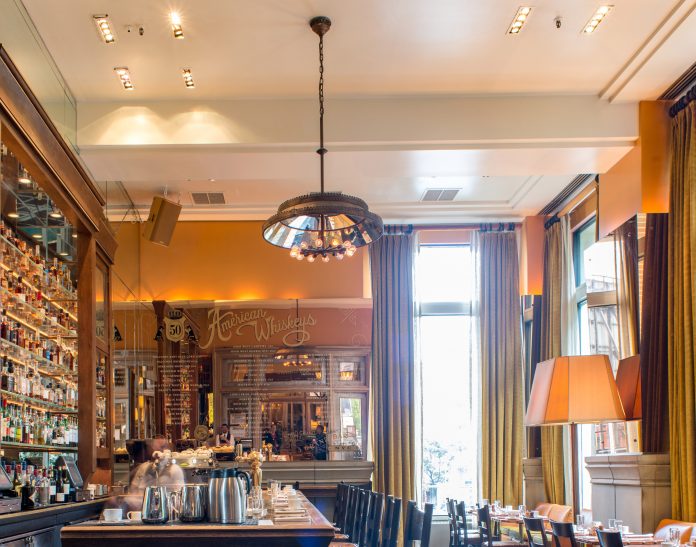 Before the Soho Grand Hotel opened in August 1996, Manhattan’s chic, exclusive SoHo district lacked a major hotel for more than a century. All that changed when Manhattan’s first luxury downtown boutique hotel introduced a level of service and style that landed the Soho Grand on Conde Nast Traveler’s “Gold List” as one of the world’s best places to stay.

The hotel is now a classic part of the neighborhood but it’s anything but old-fashioned, keeping up with the times in both design and technology. The Soho Grand has redone its sound system four times in the past 17 years in order to present a variety of musical events and other programs, including contemporary DJs. All four sound system makeovers were designed and installed by Essential Communications of East Hanover, New Jersey.

In part, a reflection of the increased emphasis on DJs, the Soho Grand’s newest sound system is based on a Dante network managed by a Symetrix Radius 12×8 EX DSP. “The Symetrix Radius manages the audio system for the entire property,” begins Essential Communications President David Schwartz. “That includes all of the common areas; the Harbor Room, which is divisible into three separate meeting rooms; the Chart Room, which hosts a variety of events and meetings; a main lounge area called the Salon; the Grand Bar at one end of the Salon; and the Club Room at the other end of the Salon. The Club Room has two divisible areas: the main Club Room Bar and Lounge, and a more private party room called the Parlor.”

In addition to Radius DSP, Essential Communications team installed new loudspeakers in the long, rectangular Salon. “We put in the new Community IC-series loudspeakers with QSC power amplifiers,” details Schwartz. “There are speakers pointed in different directions to cover some of the nooks and crannies, and we wanted to be able to apply EQ and timing as necessary, so we used a lot of DSP outputs. The Radius 12×8 EX is equipped with a 4 Channel Analog Output Card, as well as an xOut 12 output expander, so the system has 24 analog outputs. It performs very well, and it sounds great!”

Providing easy-to-use control for the new system was an important part of the design. “We customized the user interface because end users-in this case, food and beverage managers and floor managers-want simple control,” asserts Schwartz. “They want to push a button, and the volume goes up or the source changes, and that’s it. We were able to provide exactly that with the Symetrix ARC-WEB virtual interface.”

The divisible Harbor Rooms are equipped with ARC-3 wall panels, primarily used for volume/mute control and source selection. A separate ARC-3 serves as a room setup controller for room combining. The Chart Room also has an ARC-3, while yet another ARC-3 serves as a common area backup at the main audio racks. It’s so simple, which also cuts the time we spend training people.”

Schwartz and his team selected the Symetrix Radius after thorough testing. “I have experience with many of the top DSPs,” he recounts, “and we’ve done shootouts with DSPs from different manufacturers. We tested, looked at the programming, and looked at the user interfaces, which are really important. We didn’t need multi-point control for the Soho Grand, and it would be overkill to get a complex touch screen control system just to adjust volumes and sources. I’m not going to oversell; that’s not the way we do business. Symetrix ARC-WEB on a mobile device proved a brilliant solution.”

The Soho Grand Hotel’s new audio system is already a grand success. “They love the new system,” Schwartz confirms. “If you can figure out how to go the path of least resistance and provide a great product, it’s a home run. I would say in my entire career, this is one of the greatest home runs we’ve hit. We’re proud of every project we do, but this one is at the next level, and the Symetrix Radius 12×8 EX and ARC control systems were major reasons for its success”.