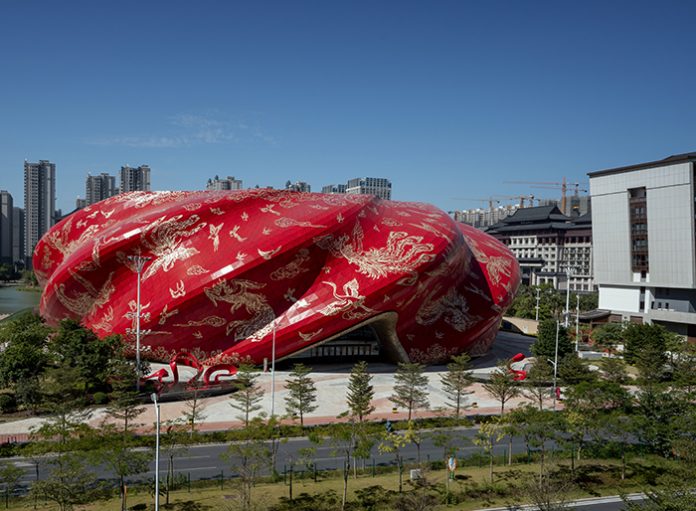 At first glance, the MONDO-DR Award winning Sunac Guangzhou Grand Theatre looks like a palace from the set of a Disney movie. The breathtaking structure, embellished with Chinese silk embroidery patterns, is not only a tribute to tradition, but a space that combines unmatched architecture with state-of-the-art audiovisual capabilities. Located in the Huadu District of Guangzhou, China, the 2,000 seat, purpose-built theatre is where it belongs, in a place that has been the home of and inspiration for artists who have helped to define the worlds’ concept of Chinese culture for thousands of years.

The architects behind the theatre’s distinctive design, Steven Chilton Architects (SCA), aimed to channel the history, emotion and creative energy of the city. This sense is magnificently captured in the incorporation of silk. Silk has been painted and embroidered by fine artists in Guangzhou for thousands of years and developed as a creative medium for depicting myths and scenes of nature on tapestries and ornamental robes.

The physicality of silk cloth informs the formal expression of the building through a series of 10 gently twisting folds that define the outer envelope. The various entrances into the building are created by ‘tucking’ the surface in on itself where the valley of each fold would meet the ground plane. Each entrance is protected by a natural canopy created by the overhanging surface before it ‘tucks’ in to define the opening.

The theatre’s mission to cultivate talent is expressed through the imagery applied to the surface of the cladding. Steven Chilton, Director of SCA said: “We were influenced by a beloved local myth, ‘100 Birds Paying Homage to the Phoenix’. The Phoenix or ‘Fenghuang’ stands for virtue and grace, whilst the allegory signifies notions of recognition, leadership and mentoring.”

Using illustrations created by artist Zhang Hongfei, SCA digitised and interpreted his hand drawings before mapping each figure onto the surface geometry. The team then developed a compositional style inspired by tattoo art aesthetics. Each figure was positioned on the body of the theatre over a series of studies in response to the topology of the surface geometry. While significant figures like the Phoenix were positioned where the form afforded prominence, lesser figures such as birds, were organically and less consciously arranged in the spaces between.

The cladding is composed of thousands of perforated aluminium panels, each painted with a unique portion of the overall composition. They are supported by a complex structure of welded steel tubes that work interdependently with the concrete superstructure supporting the theatre floors. Inside the theatre, the auditorium concept design led by Dragone, with theatre consultant, Auerbach Pollock Friedlander, is an immersive performance environment that can be transformed from a more typical 360º theatre into any number of alternate configurations.

The project was a real team effort from the beginning as Auerbach Pollock Friedlander worked closely with the theatre’s owners and end-users to develop a fast-track method of phasing the audiovisual design process to allow the foundation work to begin. The owners first wanted an audio system that provided the highest quality of enveloping surround sound for the reinforcement of voices, music and effects playback. Paul Garrity, Auerbach Pollock Friedlander’s Audiovisual Designer, explained further: “In the beginning stages of the project, a collaboration was established with the Sunac production audio system designers so that we could look at the needs of the theatre and the production requirements anticipated within the venue.

“Early studies were undertaken for loudspeaker type and placement, coordinating all efforts with other design disciplines. EASE and other computer modelling software was employed to assist in the loudspeaker array design to ensure that proper coverage, SPLs, directivity and sonic quality would be achieved. Several types of loudspeakers and equipment were carefully considered prior to making a final choice of brand and type. Once the basic elements of the design were agreed, the detailed design of the integration of the systems into the building structure was undertaken to ensure that there would be sufficient power, cabling containment, rigging elements and other related and necessary equipment to establish the infrastructure.”