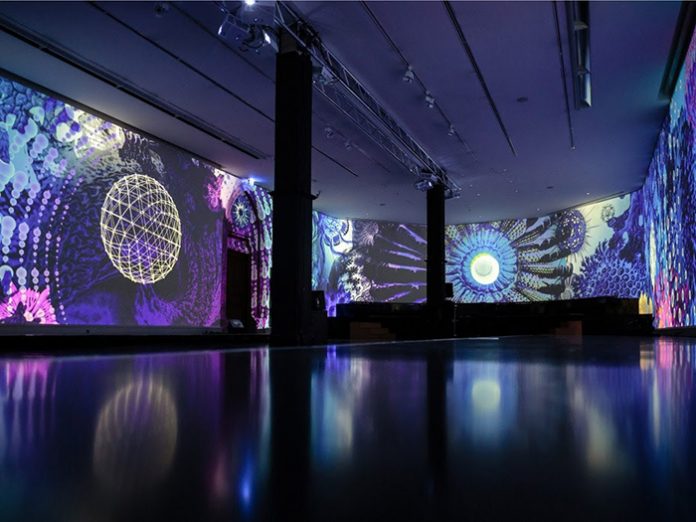 A former convent classified as a Historic Monument, the Dominicans of Haute Alsace is a place of Alsatian architectural heritage where Rhine humanism flows.

It was built in the 14th century, under the Holy Roman Empire. Consisting of a church and a cloister, it went through many wars and revolts before being deserted by the Dominican friar preachers during the French Revolution. Buildings declared national property were then sold to individuals.

In the 19th century one of the first private owners of the Convent, Jean-Jacques Bourcart, divided the church choir into two parts to create a new suspended concert hall: the so-called Superior Choir and Lower Choir.

The Lower Choir became the site of many secret stories – it is indeed the most hidden and intimate of places. Fast-forward to today, and these exact characteristics make it the ideal space to present digital artworks through the modern medium of technology.

The first audiovisual installation at the monument was created in 2014 to serve as a place for artists to showcase their artworks. It was, and still is today, regularly open to the public during concerts and visits to the Convent and is the most regularly used site installation – with the technology clocking up around 800 hours of usage per year.

Olivier Guillemin, technical director at the Couvent des Dominicains, added: “[The GT760s] have proven their reliability over the past five years”.

The intimate space on the ground floor of the Church section of the Dominican Convent is over 9 metres wide and 19 metres long. It was essential for the AV solution to cover this surface fully 360° around the walls.

The Optoma ZH406ST projectors were chosen because they offer Full HD 1080p resolution as well as a brightness of 4,200 lumens, and a short-throw of 0.50:1. It is equipped with a DuraCore laser light source that offers over 30,000 hours of maintenance-free life, so they can be installed in any position, without worrying about the ventilation of the lamp. They are also certified IP6X dust resistant, which means that the optical assembly is hermetically mounted to protect them against ingress of dust.

A total of eight ZH406ST projectors were installed by AV specialists, TVE live, as well as a sound system adapted especially for the project to create a real immersive atmosphere.

Olivier is delighted with the results and added: “The gain in contrast and shades of colour makes the work much richer and more intense”.

Les Dominicains de Haute-Alsace is a cultural meeting centre, animated by an artistic project around music, all music, in connection with digital arts.

The current immersive mapping created by videographer Claire Willemann offers a hypnotic atmosphere called Blue. As a visitor, you’ll be transported among the giant jellyfish and the planets at your fingertips to the sound of composer Vladislav Isaev.