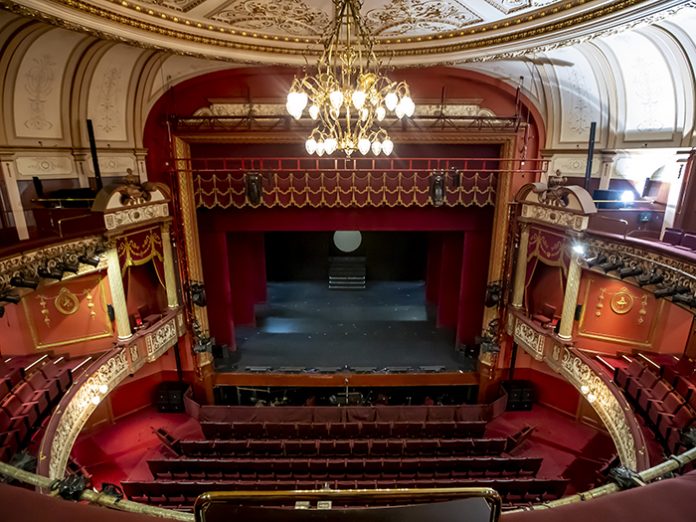 Opened in 1894, the Grand Theatre Wolverhampton is one of the city’s finest example of Victorian architecture. Next year will see it celebrate its 125th anniversary and whilst much of its original façade remains intact, its technical infrastructure has undergone significant upgrades, most recently with a visually discrete yet powerful K-array KY102 PA and DiGiCo’s latest SD12 digital mixing console, provided by specialist installer, integrator and reseller Stage Electrics.

The origins of the project date back to the end of 2017, when the theatre’s Head Of Lighting and Sound Anthony Aston and Mark Ryal, Associate Director Technical Services, contacted Stage Electrics’ audio division and spoke to audio specialist Jamie Gosney to discuss a new sound system.

“Our system was 20 years old and really needed replacing,” Anthony recalled. “We had a budget in mind, so we looked at the options that were available. What could we get straight out of the box that would fit our requirements?”

“The theatre hosts a wide variety of shows – West End Musicals, plays, Sunday concerts, comedians, amateur dramatic company musicals, which are fairly lavish affairs, and their yearly pantomime,” said Jamie. “They wanted a system that could cope with all their requirements but would also be able to stay in place when a touring company wanted to bring its own system in, which offers considerable savings in time.”

Stage Electrics had had great success at Bristol Hippodrome, Kings Theatre Glasgow, Edinburgh Playhouse and the Royal Opera House with K-array systems, so Jamie introduced the Italian manufacturer to the Wolverhampton team.

“They hadn’t heard of K-array before and asked if there was anywhere they could hear it, so I sent them to Bristol Hippodrome to listen to their KP102 system,” Jamie continued. “They loved the sound of the system but weren’t sure whether it was powerful enough to cope with everything they needed, so I suggested we demo a slightly larger system, the KY102, which has 12 four-inch drivers, as opposed to the 12 three-inch drivers in the KP102 at Bristol.”

Jamie arranged for K-array’s UK distributor 2BHeard to take a demo system to Wolverhampton, also suggesting they consider a DiGiCo SD12 for their Front of House mix position.

“When we were discussing their console requirements, I asked them what most touring productions brought with them to the theatre,” said Jamie. ”They said DiGiCo, so I arranged for them to visit DiGiCo HQ in Surrey and spend a day going through the benefits of the SD12 system.

“They absolutely loved the K-array and were convinced by the SD12, but wanted to try it out on a production, so we arranged another demo for as close to a full system as we could get, also lending them an SD12 so they could try both on a production. After that, they knew K-array and DiGiCo were the right choice.”

“We installed the entire system ourselves,” said Anthony. “We have quite a lot of in-house patching, so wherever we were going to put a speaker there was a patch there, which meant we just had to install the amp rack. With Jamie’s help, we drew a schematic.”

The theatre has also installed a QSC Q-SYS system, also supplied by Stage Electrics, as it wanted to get away from physical patching to different areas.

“We knew we had to be flexible with tours coming in,” Anthony explained. “We have a lot of speakon and XLR terminations, so we wanted to keep that ability, but be able to electronically patch as well. I did a lot of research and looked at various systems. I stumbled across Q-SYS, started looking at their online tutorials and found out quite quickly that it was something we could use. We had quite a lot of conversations with DiGiCo and Q-SYS and there was a lot of bouncing things off Jamie to make sure we were doing it the right way, then Jamie came and commissioned it with us.”

The final system comprises two KY102 columns per side to cover the stalls, with a KP52 either side for side fill and six KP52 mounted horizontally across the front of the stage as front fill, whilst two KMR218P double 18 inch sub bass per side provide the low frequency for the system.

For the Dress Circle there are two KY102 per side, with a KP52 per side for side fill. The Grand Circle has the same configuration as the Dress Circle, with the addition of a KMT18P sub per side.

The theatre already had under balcony delays speakers installed, but they do not need to be used with the K-array system, as the narrow vertical dispersion of the KY102 (seven degrees) is able to fire sound directly under the balcony. Amplification is provided by four KA84 four channel power amplifiers.

“We love the fact that DiGiCo is future proof because of the company’s development policy,” said Anthony. “We also liked the fact that the SD12 comes with a D2-Rack, so we only had to buy one additional stage box. We wanted to include Aviom personal mixers in our system and the D2-Rack has the option of an Aviom card that feeds into the Aviom A800 A-Net distribution unit. Having that installed within the DiGiCo system made it seem a lot easier than the alternatives. We have 10 Avion 8320s and two D800s, so we have the ability to run 16 Avioms if we need to. They’re also backward compatible.”

The QSC Q-sys Core 510i takes all the inputs and outputs from the system – AES, XLR, line out -driving the show relay off one part and a Sennheiser MobileConnect assistive listening system, again supplied by Stage Electrics, from another part.

“When a company plugs an XLR feed in to our system, it goes to the amps and then a feed direct from the desk, which means we get show relay and assistive listening automatically. I chose MobileConnect as I had toured with a show by the Birmingham Rep called the Government Inspector. It was a multi access show and it wasn’t practical to hand out loads of Tourguide or infrared devices. As MobileConnect is a BYOD system, it was the perfect solution. When I came to the Grand, I suggested we use MobileConnect here, too. Again, we self-installed it and it runs over our existing WiFi. We do audio brochures and audio description through it, but run a Tourguide system as a backup for older members of the audience who don’t want to use phones or iPads.”

The process had been a great example of real collaboration, with the theatre putting forward its ideas for the system and Stage Electrics suggesting ways of enhancing them.

“We’ve finished up with a system that is better than the one we originally specified,” Anthony concluded. “The combination of K-array and DiGiCo sounds stunning. We’ve taken advantage of every feature that’s there and we’ve turned it into something that we love using every day. In fact, everyone that’s used it has been pleasantly surprised. It works really well, not only in terms of dynamics, but visually as there’s a lot less furniture. We have a really tall prosc and now it looks a lot more original; we’ve got our theatre back to how it really should look. It’s the best system for this venue and it looks beautiful. Big things do come in small packages.”