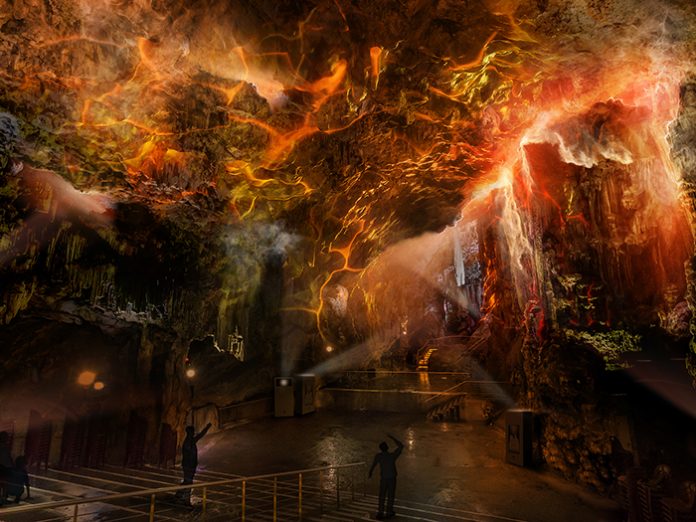 Pixel Artworks, a pioneer in light and pixel technology, has delivered one of the most
complex projection mapping projects ever created within St. Michael’s Cave in Gibraltar.
The Gibraltar Government awarded the project to WrightTech Media, a local digital
marketing solutions company with extensive knowledge of the site. From there, Pixel
Artworks collaborated with WrightTech Media on the pitch, as well as the design and
delivery of St. Michael’s Cave, the complex show, to push the boundaries of projection
mapping further than ever before – creating a unique immersive light and sound installation that opened to the public in June 2021.

While the project sought to enhance the current Gibraltar Upper Rock Nature Reserve
visitor experience, there was no specific site in mind. WrightTech Media and Pixel Artworks
showed how St. Michael’s Cave could be used in a unique way to take the audience on an
unforgettable journey through Gibraltar’s natural history, using projection mapping
technology, lighting design and immersive audio.

Christian Wright, Director, WrightTech Media, explains how it all began in Liverpool, UK: “I
went to the museum in Liverpool to see the Terracotta Warriors – and I just assumed it
would be a really stuffy, standard museum experience. But, when I went in, it was full of AV solutions providing colour, sound and engagement for the visitor that was way beyond my expectations. I thought that it was the exact type of thing we needed in Gibraltar to tell the story of its history and culture – I thought it’d work phenomenally well.

“Thankfully, the Gibraltar government released an expression of interest with regards to
improving the Upper Rock Nature Reserve. So, with St. Michael’s Cave being a unique,
popular tourist attraction, it was a natural choice – particularly as there wasn’t much by way of technology there anyway. We started to look at the sort of technologies that would work in a sympathetic manner to the natural aesthetic of the cave – and it seemed that projection mapping was the way forward.”

After extensive research, which included poring over the portfolios of various companies,
Christian felt that Pixel Artworks were best placed to deliver what was needed for St.
Michael’s Cave.

“I thought instantly that Pixel Artworks knew what they were doing – they have a real
passion for what they do. So, I called them to see how they could flex their creative
muscles, pitched the idea to the government and they loved it,” added Christian.

“The aim of the project was to reinvigorate Gibraltar’s tourist industry, and I felt we needed
something very visual and technology-based to engage audiences to a new level. My team
knows the site very well, but it was great to get the fresh eyes of Pixel Artworks’ creative
team, who spotted opportunities we hadn’t thought about, and also helped us to home in on the story we wanted to tell.”

The show, entitled ‘The Awakening’, sympathetically showcases the beauty of the cave,
while uncovering the layers of Gibraltar’s history fused within the rock, creating a stunning
display that is expected to receive global acclaim.