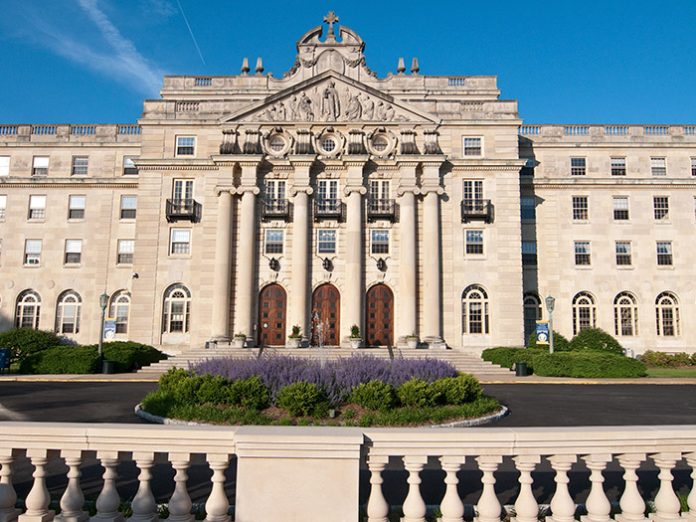 The roots of St. Mary’s Seminary date back to its original charter, established in 1856. The seminary’s 50-acre campus opened in 1954, the seminary moved to its current site, and has grown to become one of the state’s most respected theological institutions.

Scott Mowell of Conference Technologies observed the following: “The interior had been gutted and completely rebuilt, and the addition of acoustical treatment certainly improved things. That said, it was still a challenging space. The ceiling is about 25 feet high, and there are several large, very tall windows on one wall, with doors and windows on the opposite wall.”

Portable seating is set up on the floor for larger events, with room for an audience of about 300.

With the hall still primarily serving as a basketball and volleyball venue, the expansive hardwood floors add to the room’s very live acoustics. Creating a space that could host events would require getting control of the sound, and the new Iconyx Gen5 system was key to accomplishing that.

The system is comprised of two Iconyx IC16-RN digitally steered column arrays. The IC16-RN is part of the new Gen5 Series, the fifth generation of Iconyx beam steering technology, delivering faster and more accurate control than ever before. A pair of PN212-SUBR subwoofers, flown at the opposite side of the room, adds low-end punch and full spectrum musicality.

Having worked with Iconyx systems in the past, Mowell knew what to expect, but was still pleasantly surprised.

Scott added that the new Iconyx Gen5 gave even more control, and the new RHAON II software enabled an easier and faster set up of the entire system.

The Iconyx system enables a more focused sound for the audience, by steering it away from the walls and windows. The difference in intelligibility is said to be “tremendous.”