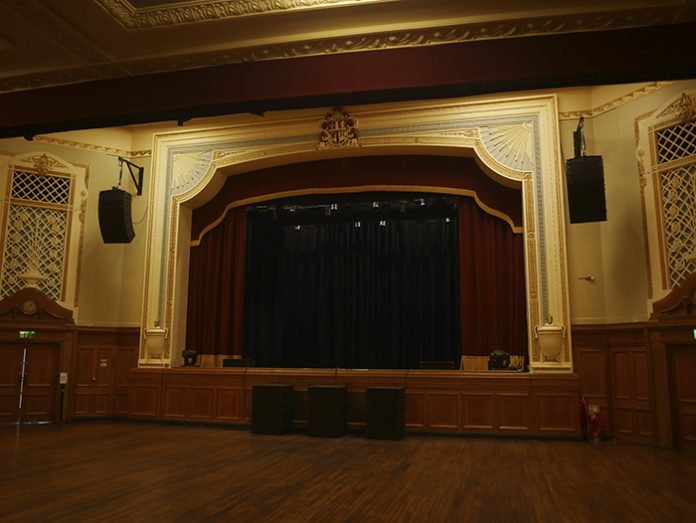 Islington’s Grade II-listed Assembly Hall has committed to an investment in its technical infrastructure, including the first UK installation of HARMAN’s brand new JBL VTX A8 line array system at front of house.

Inspired by the experienced management team of Lucinda Brown and Technical Manager, Tom Watt, the Council-owned building, part of Islington Town Hall complex, can now build on a reputation that has seen Ed Sheeran, Rag’n’Bone Man and Snow Patrol play there in the past.

Future-proofing the installation will bring further stability to a venue which first opened back in 1929 before closing in the mid-1980s. After laying dormant for around 30 years Islington Council funded its refurbishment, and in 2010 it appeared back on the touring map.

The installation was undertaken by SSE Audio Group, who were also responsible for the new JBL VTX A12 installation (with VTX A8 acting as delays and front-fills) at London’s Troxy—coincidentally another Grade II-listed art deco building like the Assembly Hall. Able to use the existing infrastructure, and taking advantage of the advanced JBL rigging, they were able to hoist and align the system expediently, much to the delight of the venue.

“SSE worked hard to get the system in quickly working around events, and expedited the delivery seamlessly in the time allotted.” said Tom Watt.

They have flown L/R hangs of six VTX A8 elements per side, adding a further two as lip fills on the stage. Low frequency extension is provided by six B18 single 18” subs, with the entire system powered by four Crown I-Tech 4x3500HD four-channel amplifiers.

After hearing Troxy’s JBL system Tom observed: “I knew the A8 was a 3-way system and it seemed to cover the midrange better, but the HF detail is also incredible. With this PA you notice reflections far less and it worked straight out of the box, with flat EQ. With the 110° degree dispersion, we were able to dispense with the old centre cluster we had before, as the Left / Right stereo imaging is amazing.”

Ed Jackson, Harman Pro Tour Sound Application Engineer, ensured the system was optimised, carrying out EASE room predictions and using Harman’s proprietary Line Array Calculator (LAC)—lowering the PA to hit both the narrow balcony and the back of the room.

“Ed’s design was excellent,” praised Tom. “I wasn’t certain six boxes would be enough to hit the back of the room but it is all the weight-loading would withstand. It was a huge relief to find that it was sufficient.”

The subsonic sound is critical since the venue is situated in the densely populated Upper Street and sound has to be contained to avoid noise pollution. “There is huge headroom in both the subs and the amplifiers,” noted Tom.

Also from the HARMAN portfolio, the venue has added a Soundcraft Vi3000 which Watt describes it as “extremely fast … everything is where you want it on the surface; there are plenty of faders and it sounds amazing, with warmth and precision.”

Ed Jackson is satisfied that the A8 concept has been proven: “My prime concerns were that we had coverage to the back of the room, which was noticeably lacking in the old PA, and achieve uniform balcony coverage. If it hadn’t worked with the shorter array we would probably have walked away.

“In terms of sound quality from the transducers this series has got the physical parts of the cabinets right to the point where we are not so reliant on DSP. The system sounds good as soon as you turn it on.”

Lucinda Brown is likewise impressed, both with the new system and the marketability it will give the venue: “We want to be the best and we can only offer that with high quality. Already people are appreciating the difference this system makes.” In addition to visiting sound engineers, this includes the venue’s own tech team, who are unanimous in their praise.