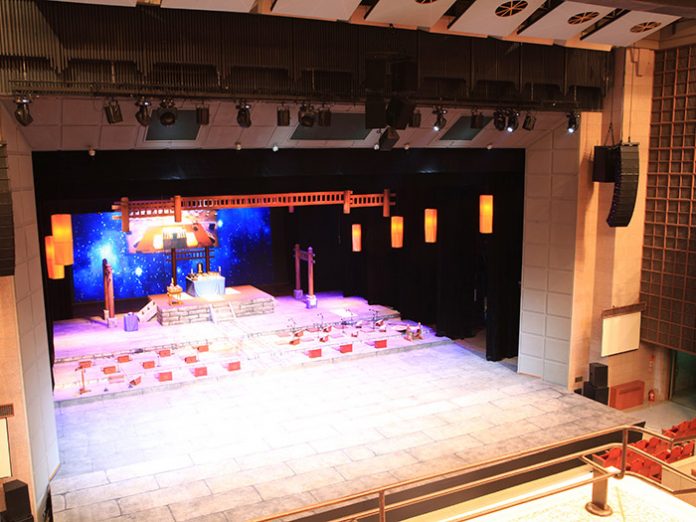 The National Gugak Centre in Seoul, South Korea has added M’elodie line array loudspeakers to upgrade the decade-old Meyer Sound system in its 800-seat Yeak-Dang Theatre. Renowned for its role in preserving and promoting ancient Korean musical traditions, the centre continues to count on the durability and reliability of its UPM-1P, CQ-1, and CQ-2 loudspeakers, which were reconfigured for the upgraded system.

The decision to upgrade with M’elodie was not a foregone conclusion, despite the Yeak-Dang’s previous positive experience with Meyer Sound. “When it comes to government spending, it’s not always easy to specify a particular brand,” said Ungseop Kwon of Sovico, Meyer Sound’s Korean distributor. “The committee members listened critically to several loudspeakers and all agreed that the M’elodie was the best system for the hall.
“With a Meyer Sound system in place for more than 10 years, it was not unexpected that they would be pleased with M’elodie,” continued Ungseop. “But the system’s performance has exceeded expectations, and everyone is quite pleased.”

The new system includes left and right arrays of 12 M’elodie loudspeakers each and four 600-HP subwoofers.

“The theatre’s acoustics are challenging,” explained Ungseop. “The L-R M’elodie arrays provide an ideal solution, with excellent sound and very even coverage for all seats.”
Taken from the previous system, one UPA-1P, two CQ-1, and two CQ-2 loudspeakers comprise a centre cluster used for voice announcements, with one CQ-1 loudspeaker each at left and right. Ten UPM-1P loudspeakers have also been redeployed to cover front fill and delay. The upgrade was designed and installed by Sovuco.

Known worldwide as a leading manufacturer of the highest quality systems, Meyer Sound exercises rigorous quality control standards on all of its products, ensuring that they will remain reliable and maintain their specifications for years to come.

“The previous system’s components were still in excellent condition, even after many years of constant use,” reported Ungseop. “Repurposing them in this way allowed us to create a true L-C-R configuration, with uniform L-R coverage for music, and a centre channel for voice.”

Founded in 1950, the National Gugak Centre has roots dating back to the Eumseongseo music institute of seventh-century Korea.