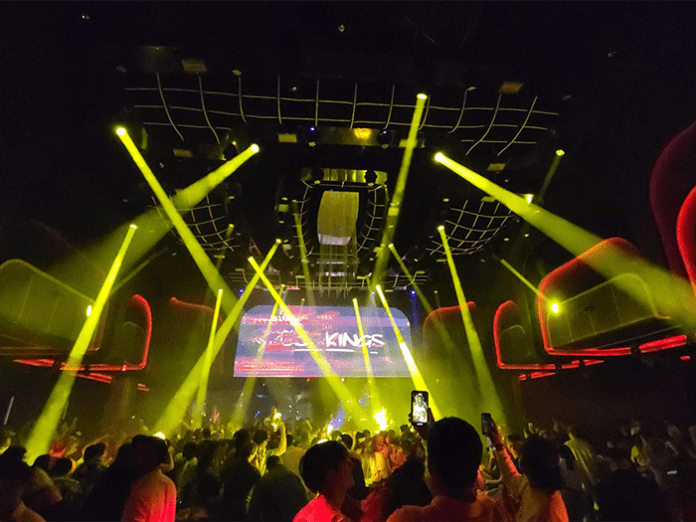 DAER South Florida includes DAER Dayclub, DAER Nightclub and Rooftop Live and is the second location of the DAER franchise (the original is located at the Hard Rock in Atlantic City). Located at the iconic Guitar Hotel, DAER Nightclub brings in world-class DJs and other live artists, making it a top shelf destination for clubbers up and down the East Coast.

Elation lighting gear has been a staple of SJ Lighting designs for years and the successful relationship continued at DAER South Florida. Looking for a compact moving head that could withstand the intense punishment that a high-energy nightclub dishes out, SJ Lighting owner Steve Lieberman preferred the greater reliability that comes with an LED engine.

“LED source moving lights offer a lot of advantages,” he said. “Reduced power consumption, extended life of the source, less mechanical items. These items were paramount in the decision process of how to upgrade this venue.

“Elation sent us a Fuze SFX fixture to evaluate in our office and we were ecstatic with the results. Not only did we upgrade Daer, but we decided to specify the Fuze SFX into several new projects.”

Powered by a 300W white LED source with very sharp optics, the Fuze SFX is a compact multi-purpose LED luminaire that provides over 12,000 lumens of output yet maintains a small footprint. A unique combination of spot and effects fixture, it offers CMY color-mixing, 18 carefully designed gobos and a 4.5° to 38° zoom. It is also low power and reasonably lightweight, which is important in nightclub installs.

SJ Lighting put 26 of the hybrid spot and effects fixtures in DAER Nightclub in early January.

Mounted above the dancefloor, the Fuze moving heads light the space in everything from color washes to sweeping midair spot looks and beam effects. The fixtures play an integral part in a custom system that includes lighting from a mix of manufacturers and complement a large 3D-mapped LED chandelier centerpiece and custom-designed theatrical lighting pods, all automated, that command the space.

Lieberman reports no issues with the Fuze SFX fixtures since installation. Project manager and associate designer on the DAER Nightclub project was Ben Rehm of SJ Lighting, “without whom this project never would have happened,” Lieberman concluded.