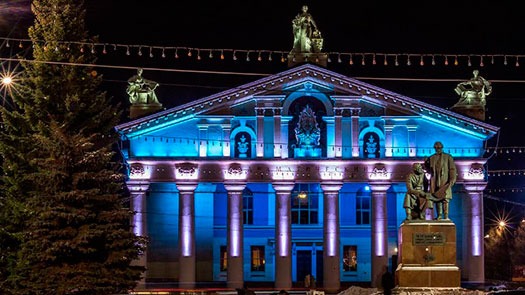 Nestled in the depths of the rugged Ural mountain range about 1,100 miles from Moscow, Nizhny Tagil has, since rich mineral deposits were discovered here in 1696 and the first factory was founded in 1833, become an industrial powerhouse of Russia.

Industrialists and inventors built the country’s first steam locomotive here, and the city is now home to the world’s largest factory, Uralvagonzavod, producer of the legendary T-34 tanks.

Culture and spiritual relaxation in the ‘city of the colourful sky’ is a fundamental component of the city’s history, punctuated by the opening of a drama theatre in 1946 as a thank you to the people of Nizhny Tagil for their heroic contribution to victory in the 1941–1945 Great Patriotic War. The D. Mamin-Sibiryak Drama Theatre, a majestic building named after the Russian author famous for his novels and short stories about life in the Ural Mountains, underwent a series of major renovations between 2007 and 2015 following an instruction from President Vladimir Putin, and has now become of the symbols of the city, hosting academic stage plays as well holiday concerts and cultural events.

As part of the complex upgrade the main auditorium was renovated, modern stage equipment and lighting was introduced, and a brand new sound system was installed. Under pressure from an audio budget progressively restricted by a falling exchange rate, an opportunity arose for systems integrator Sistema, based in Sarov around 500 km from Moscow, to specify an Axiom line array loudspeaker system for the main auditorium.

“The theatre had been in a poor state for some years, and had not been attended to for decades,” said Nikolay Florensky, Sistema’s sales and brand manager. “We were asked to provide sound and lighting services as part of the larger project that included renovation of the building itself, auditorium and all the service rooms. It was clear that the Axiom loudspeaker products would provide a high quality solution while at the same time meeting the reduced budget, in place of a far more expensive US-based manufacturer.”

The Sistema technical team of Sergey Sheikov, Konstantin Kamchatny, and Oleg Novikov managed the entire installation including connectivity, networking, and final sound tuning. The sound system for the 475-seat theatre consists of ten Axiom AX2010A active dual 10-inch line array elements plus two SW215A active dual 15-inch subwoofers flown behind the cluster each side of the stage to achieve a full frequency response, with the lowest octave provided by a single SW218A active dual 18-inch subwoofer built in under the centre of the stage. A NEOS152AXS active 15-inch two-way loudspeaker is flown in the centre above the proscenium arch as a centre source.

Two further NEOS152AXS two-ways are suspended horizontally as under-balcony fills, and six NEOS122AXS active 12-inch two-way loudspeakers are positioned around the room acting in a surround sound function. A total of 19 LT compact loudspeakers in 6-inch, 8-inch, and 10-inch two-way configurations are installed throughout the building providing background music and voice announcement coverage.

“The Axiom line array has raised the audio quality of all their events to a whole new level,” commented Nikolay. “The client is fully satisfied with the quality of sound. Mr Putin himself was here in November to inspect the final stages of the renovation project, which has been entirely successful.”