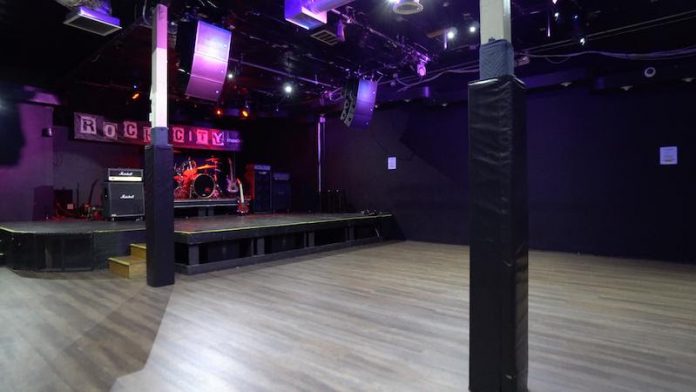 Live music venue, recording studio, music school, party space and community treasure-Rock City Studios does it all, supporting the local music community in Ventura County, California. Much of the action happens in one main room where Rock City Studios host shows by national and local acts, as well as recording and videotaping local bands’ performances. But until recently, the community-oriented space had a serious issue, its old PA system wasn’t getting the job done. The solution was elusive until the Rock City team discovered Renkus-Heinz loudspeakers.

“This space was a hodge-podge of different businesses,” comments Rock City Studios co-owner and general manager Brett DeCarlo. “We’ve renovated it and made it more kid friendly, cleaner, bigger, better, faster and stronger. Everything goes on in our main room, which holds 300 standing people. We have big concerts in here, often with national bands and local support. There are moshpits and people jumping up and down and going as hard, and having as much fun as they could possibly have.”

“This is an interesting room, and it’s gone through many iterations,” agrees Rock City front-of-house engineer Mike Brown. “The fundamental problem we had was that the previous PA system was a traditional point-source array. We had a sweet spot in the middle of the floor but if you wandered too far front or back, you got out of that sweet spot. To get the levels that we needed for the bands that play in this area we had to double up on our conventional PA system and that led to comb filtering and interference as we tried to fill the space with volume to get over the crowd levels. We also suffered from loss of high end frequency response, poor stereo separation and resonant frequencies. At first we attributed it to the room which has anomalies but when we installed the Renkus-Heinz system it became very clear that we had been suffering from a dated PA system.”

Brett and Mike attended the Winter NAMM show in Anaheim in search of a solution and all but stumbled over it. “Brett heard the Renkus-Heinz system in the Anaheim Hilton hotel and he was just floored by how fantastic it sounded,” Mike relates. “He brought me over to check it out. The Hilton lobby is an odd shape and what was amazing was not only the sound of the Renkus-Heinz system but the ability to keep sound from bleeding into the surrounding areas. I could carry on a conversation on the upper balcony yet go down to the floor in front of the band and hear this fantastic sound.”

The Rock City team visited Renkus-Heinz’ NAMM booth and the manufacturer put them in touch with Jeff Miranda at Pacific AV. “Jeff did a phenomenal job,” Mike praises. “The Hilton system used Renkus-Heinz IC2-series loudspeakers and we thought, “Great, we have unique obstacles so what would be better than a steerable array for Rock City?” But Jeff, having become almost part of the family realised that the IC2 wasn’t appropriate for this venue. He immediately steered us toward the Renkus-Heinz CFX101LA modular point-source array. He built a PA with the CFX101LA that sounded so fantastic, we were immediately sold.”

With the flexibility to be flown, ground-stacked or pole-mounted, the CFX101LA combines the performance and pattern control of a line array with the clarity of a point-source system in a compact, sleek, affordable design. Rock City’s system employs two CFX101LAs. A pair of Renkus-Heinz CFX15S 15-inch high-performance subwoofers mounted above the arrays generate the powerful low-end the venue required. “With the previous system, the sound was too muddy and we didn’t have that huge feeling what I call the ‘heart punch,’ when you feel it in your chest,” avers Brett. “With the CFX system, it’s a night-and-day difference. The stereo image is a lot wider. The clarity, especially in the high end, is there. The low end, too, you get that heart punch, that kick in your stomach that we’d been missing. We’re at a level of completion now.”

“The CFX101s allowed me to adjust the angles so I’ve got fantastic coverage from the front of the venue all the way to the back,” expounds Mike. “People who were here with our previous PA and with the Renkus-Heinz system are amazed that they can walk around and get the same sound anywhere. We do everything here from punk rock to praise bands and everyone who comes through comments on how great this venue sounds. We’ve attracted more national acts and the kids are amazed at the quality of the sound that they get. With the Renkus-Heinz system, we can meet some of the rider requirements for the bigger name acts that look for places to play outside of L.A. Now this truly is a professional venue.”

While sound was the most important factor in choosing Renkus-Heinz, it wasn’t the only consideration. “The system has to look cool too,” Brett insists. “Our new Renkus-Heinz system looks great, sounds great and is built to last. We’ll take that.”