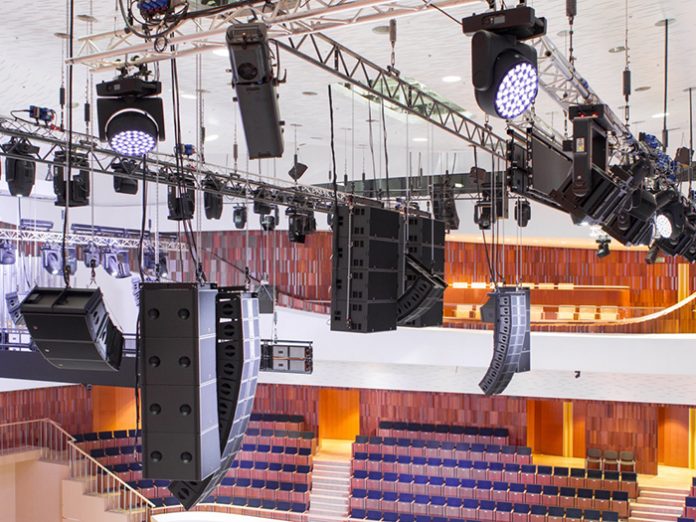 The grand opening ceremony took the form of a spectacular gala with brilliant performances from the Mariinsky Theatre Symphonic Orchestra conducted by Maestro Gergiev, and opera stars Anna Netrebko, Yusif Ayvazov, Ildar Abdrazakov, Albina Shagimuratova and Juan Diego Flores. The event was attended by official representatives including President Vladimir Putin, Prime Minister Dmitry Medvedev and Chairman of the State Duma, Vyacheslav Volodin. The President stated that the Zaryadye Concert Hall was ‘a music complex of the future’ that represented ‘the historic pride of the nation and its aspiration to create new,’ and gave Moscow and the whole country ‘an exceptional image.’

Zaryadye Concert Hall is one of the most complex venues in Russia in terms of the scope and volume of its technical equipment. This is partly thanks to Doka which has been involved in the project since 2015 and contributed to the development of the venue’s concept and technology.

The 1,600-seat Philharmonia stage has been designed to host different types of performances from classic music concerts and theatre, to international conferences and shows. To handle this variety, Doka was careful to specify only precisely chosen lighting equipment with the flexibility and quality to perform to the highest standards, even under broadcast conditions.

“We decided to specify Robert Juliat for this prestigious, high-profile venue not just because of RJ’s reputation for superb quality and 100% reliability, but also because our experience when using RJ equipment in the best symphony halls around the world has confirmed this to be true,” said Doka’s director of lighting, Vasily Litvin.

The RJ 325LF Cin’k Fresnels were fitted with 2.5kW tungsten lamps and the RJ 326LF Cin’k Fresnels with 2500W discharge lamps before all were mounted in motorised yokes and rigged in the overhead grid. From here the Fresnels are used to deliver soft edged, bright beams of light to the orchestra pit and the stage, largely due to the 250mm Fresnel lens present in both types of fixture. “The fact that the diameter of the Fresnel lens is the same for both halogen and discharge spotlights is very convenient for working with the orchestra,” stated Vasily. “The motorised yokes enable quick, remote positioning of the pan, tilt and focus of the ceiling-mounted Cin’k Fresnels, while the choice of tungsten and discharge sources allows us to create a perfect balance of warm and cold light during television broadcasts of the stage performances.”

The Robert Juliat fixtures are installed in both the main Philharmonia hall and the smaller 400-seat studio, with the four Victor followspots installed permanently in both venues. The 10°-25° zoom range of the RJ 710 profile and the 8-16° zoom range of the RJ 711 profile with its extremely narrow beam are very useful for the multiple uses to which they are put. “The profiles are used as side light, as front light from stationary soffit bridges and as conductor lighting,” said Vasily. “Each lighting designer has his own preferences for where the equipment should be installed so the RJ’s versatility is a huge asset.”

Damir Ismagilov, the Bolshoi Theatre’s leading lighting designer who contributed to the stage lighting design of the Zaryadye concert hall, believes the combination of energy and technical brilliance in the new concert hall makes it a special place: “Zaryadye is full of surprises,” he said. “Inside an amazing architectural the complex and sophisticated combination of lighting and technical equipment is capable of transforming every single event into a one-of-a-kind performance.”