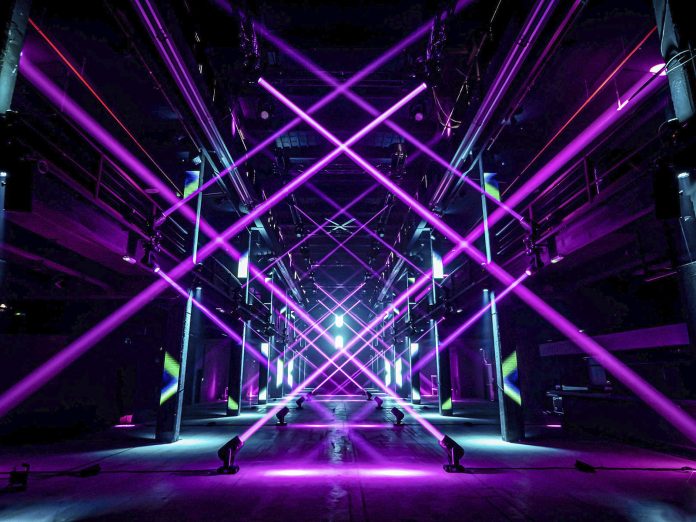 Lux Partum – translated to ‘emission of light’ in Latin – was a beautifully sculpted interactive lighting installation and live stream staged at the Motorwerk event space in Berlin, created by Lighting and Show Designer, Chris Moylan and his team.

The team behind the piece were Lars Murasch, Andreas Schindler, and Matthias Schöffmann, who together with acclaimed DJ and music producer, Paul van Dyk – who composed a special soundtrack – played a three-hour live concert during the first weekend of lockdown.

The work utilised 54 Robe moving lights including MegaPointes, Pointes plus TETRA2 moving LED battens which were installed in the venue with LED screen elements, and all rigged, programmed and set up to be accessed by the public via the lighting.stream website and ‘played’ in real-time.

By the end of the 10-day run, over 43,000 visitors from 94 countries had engaged with the art work in 6.355 registered sessions utilising lighting.stream’s bespoke user interface technology. They chose over 200.000 different combinations of lighting / video which were viewed over 528,404 minutes of activity.

Visitors could select the colour and patterns of the lighting and video effects as they played out to the music track, changing at pre-determined points to keep the groove flowing harmoniously. Running over two weekends and the intervening week, van Dyk played a thee-hour live set at the Motorwerk, enabling his massive fanbase to tune into the stream and be part of making the concert visuals look spectacular – each visitor to the site having a three-minute slot.

Chris – like so many others in the industry – was regularly chatting to friends and colleagues, all of whom were getting itchy feet in lockdown, trying to think of some meaningful way of generating positive energy and doing what they love most – designing shows.

He gathered his team – who also happen to be great friends – and they started talking. Matthias is based in Austria and works with Chris extensively on programming light shows, and he developed and energised all the web streaming aspects of the gig; Lars helped source the venue via his extensive network of connections and called on rental company TLT Event to provide the kit as well as supplying some himself, including the LED screens and the console. Video expert Andreas designed and produced all the generative visuals.

The physical starting point was getting the venue. From there, Chris took the Motorwerk’s striking interior and evolved his visual brainchild! The former engineering factory and industrial space built in 1921 is now a heritage-listed building, renovated to retain all the original character and raw elegance to become a charismatic event space.

The main hall stretches over 90m long, has a good height and is full of iron columns and RSJ beam-work, so Moylan wanted to accentuate the scale and architecture of the space and integrate it into the design. “It immediately lent itself to a distinctive geometric lighting design,” explained Moylan, “and to having beams and LED battens as the lighting instruments”. He added that it was also relatively easy to rig the lighting in the space utilising the house rigging facilities plus structural elements like the balcony rails and RSJs.

He measured out the room meticulously, and lights and LED video panels were positioned precisely. In the case of the lights it was so their beams could create a series of closed hexagons running all the way down the hall, optimising the sense of perspective for the webcam position from which remote viewers would see and experience the work.

Using hexagonal geometry as a base also enabled multiple other shapes and patterns in different combinations. Lighting equipment – including some of the 20 Pointes, 20 MegaPointes and 14 Tetra2 bars – were supplied and rigged by TLT Event. Additional Robes were supplied directly from Robe, and the final two MegaPointes needed came from Berlin’s Friedrichstadt Palast Theatre.

Two rows of MegaPointes deployed on the floor were mirrored by two rows in the ceiling all at exactly the same distance away from each other. Rigged along the middle section – just beneath the balcony that traverses the entire length of the hall – were two rows of Pointes immediately above / below one another with exactly 4m between the top and the bottom MegaPointes and the Pointes.

This set up created the perfect geometric patterns that Chris envisioned. He has used both fixtures extensively in his work, and likes them for their speed, brightness, and versatility. Moylan said: “For a relatively small amount of lights in a large space, we could make a massive impact.”

A series of LED PARs were installed between each of the columns. It was his first-time using Robe’s new TETRA2 LED battens. “They are like monsters!” he exclaimed. “We could not use them at full intensity as it was too much, so they were tweaked down!”

Seven TETRA2s were positioned vertically each side at the back of the room, with one column of 10mm LED screen in the middle to produce a blisteringly bright and dynamic end feature that helped create an illusion elongating the physical space which was especially effective onscreen.

Chris enjoyed the “impressive” walls of light that could be created with the TETRA2s and he also included its flower effect in the stream’s viewer options. “It’s a very cool innovation to have this sort of feature on a linear bar.”

The other LED sections were attached to the pillars all the way down the room. Lighting was all programmed on a MA Lighting grandMA2 console and the generative visuals were created by Andreas using Notch running via a disguise media server which mapped it to the screens via Resolume. When prepping, they visualised all the video and lighting effects on the screens in Depence². “We had some stipulations about the music track,” explained Chris. “There needed to be a lot of shifts and multiple lifts and falls to trigger the visuals change commands in the software and he got it immediately.”

For Paul’s pumping live set, Chris activated the lighting changes, with guests to the website choosing the colours and positions. He admits to a few sharp intakes of breath when it came to colour combinations “but that randomness was all part of the fun!”

All the team and the crew from TLT Event loved being on site again and being involved in a show. “You cannot believe how excited we all were to be there and be working together – all socially distanced of course – but there in the venue for real,” Moylan continued. “We are all so passionate about this industry and what we do, so really appreciated the opportunity like never before!”

Chris concluded: “This has been a great project, however, it’s by no means a replacement for experiencing art and shows in real spaces and in relation to other people. Culture must continue, and people most definitely need haptic experiences in three-dimensional environments.”