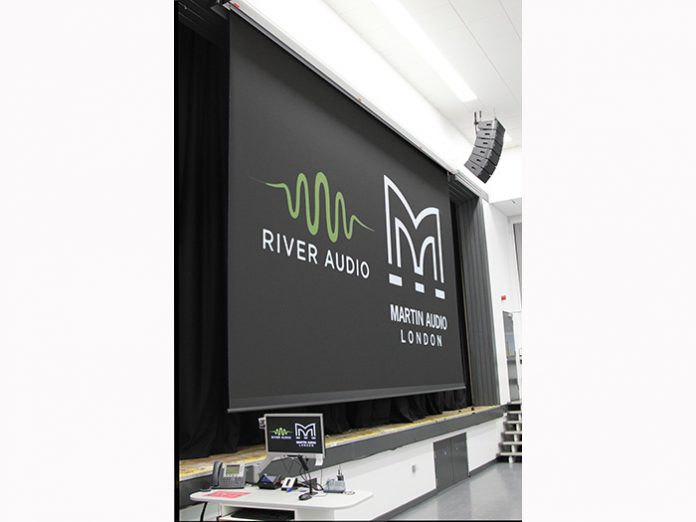 The University wanted to replace its small vocal PA in this location with an upgraded system that would be suitable not only for speech but also music and drama performance.  When a delegation of the University’s AV technicians attended a live sound training course with the local Base Sound, to improve their mixing capabilities, they were introduced to Martin Audio’s signature sound and were immediately impressed.

After reviewing various systems they opted for the WPM line array and chose Base Sound sister company, River Audio, to supply and install six of the WPM tops, flown each side of the proscenium, with and a pair of WX218 subs on the ground, all running from a pair of Martin Audio iKon 8-channel amps.

As the two clusters are trimmed around 6m from the ground, they have also installed five Martin Audio CDD6’s, running in mono, on the front of the stage, to deliver excellent infill clarity for those sat underneath the main clusters.

According to River Audio’s owner, Howard Williams, it had been an easy decision to recommend Martin Audio: “I have used their equipment since 1995 both for live events and on installs and have always liked their broad range of live and installation products. I also use Martin Audio to teach live sound engineering on, and it has now become my speaker of choice for installations. “

The AV technicians needed no further convincing. Having hired in various other systems for events they recognised Martin Audio as a brand they could trust. ”With regard to WPM they liked the discreet size, along with dispersion and power capability, and having heard other Martin systems they also liked the voicing,” continued Howard.

One of the benefits of the WPM is its scalable resolution, and Howard Williams recalls how this was optimised. “Having taken measurements of the spec and looked at the flying positions available, myself and Jack Warren [the main Plymouth technician involved with the installation] discussed the resolutions available and then worked with Simon [Purse] at Martin Audio to get the correct angles, positions and EQ calculated so that the install could be as hassle free as possible.

“As it is being used for both conference and performing arts productions they wanted the highest amount of control they could get and went for 1-box resolution.”

The university is delighted with the sound quality and coverage of the system and is enjoying using if for both presentation and performing arts events.