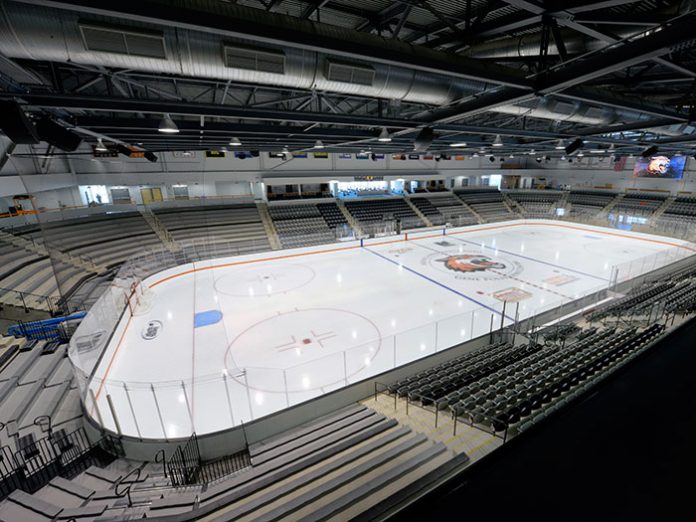 Completed in September 2014, Rochester Institute of Technologies’ Gene Polisseni Center is home to the RIT men’s and women’s hockey teams, though the multipurpose facility also hosts commencement exercises, concerts, and performing arts events. Having experienced the limitations of its old arena, the RIT team had clear ideas about the sound system for their new arena. Even better, they were able to articulate their ideas to engineering firm and systems integrator Smith + Andersen. Smith + Andersen, in turn, had an equally clear idea where to turn for a solution: Fulcrum Acoustic.

“This is primarily a hockey arena that can accommodate up to 4,300,” explained Smith + Anderson Audiovisual Manager Dustin Su. “Intelligibility is a factor but they needed a loud system that could create a great fan atmosphere at games, give the home team the advantage, and intimidate the visiting team. At games, there’s a Pep Band that probably doesn’t need to be reinforced but we put infrastructure in place for mixing them. We needed a rocking system that could handle all that, as well as handling other events.”

Working with an EASE model based on the architect’s plans, Fulcrum Acoustic and Smith + Andersen came up with a distributed speaker system based on 20 Fulcrum Acoustic Prophile L-series 3-way coaxial loudspeakers to serve the bleachers and CX-series 2-way coaxial loudspeakers along the concourse. A rigging grid used for event rigging serves double duty for hanging the speakers. Labgruppen amplifiers drive the loudspeakers, with DSP handled by BSS London. The system was installed by AV Solutions.

“We considered a design with two centre clusters but the distributed design offered more flexibility, including the ability to reconfigure the space,” explained Dustin. “For hockey games, the school wanted the ability to set the speakers to hit the crowd area and also cover the rink to pump up the players. A distributed design supported that. And if the hall is not full, they can activate just part of the hall.”

Another bonus with Fulcrum loudspeakers was their compact size. “Because it’s a coaxial design, it takes up a relatively small footprint,” Dustin noted. “During the planning phase, we knew that video scoreboards would be on either side of the wall, but their exact location was not known until late in the project. We were concerned about the sightlines to the scoreboards being obstructed by loudspeakers, especially from the suites. But the Fulcrum loudspeakers are low-profile enough that we had no problem with sightlines regardless of where the scoreboards were placed.”

It turned out to be an excellent project, concluded Dustin. “The team at Fulcrum Acoustic and the building architects [BBB Architects of Ottawa] were great to work with. RIT has a highly respected program, and we worked very closely with their event productions group and strong broadcasting team. It was great to be part of the project. And everyone was very happy with the Fulcrum Acoustic system.”