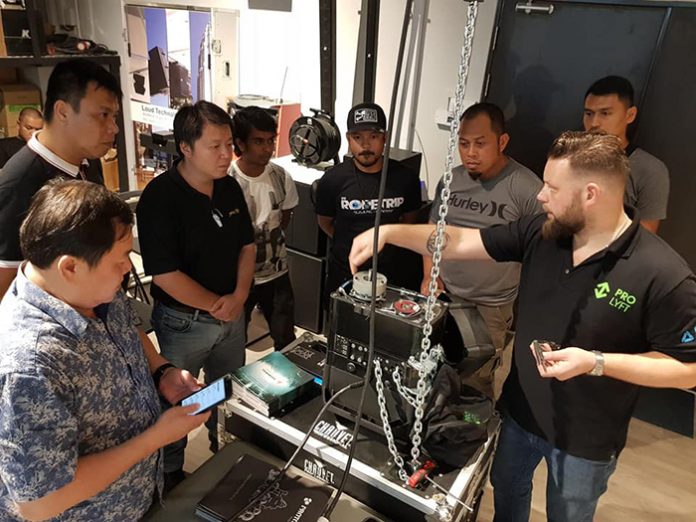 By listening to the Singaporean entertainment industry and boosted with an ongoing awareness of rigging safety in this industry, Loud Technologies Asia (LTA) took the lead in organising as what was named ‘Rigging safety awareness’ seminar in its brand new showroom and training facility, which was opened only recently and used as a seminar room for the very first time.

This seminar was organised in conjunction with Prolyte Asia Pacific (PAP) and was conducted by technical manager Jasper van der Sluis. It was the first time this kind of seminar was presented, and although it was under the ‘Prolyte campus’ umbrella, Colin Quek owner and managing director of LTA stated: “Although we are the Prolyft Service Point for Singapore and dedicated dealer for Prolyte, Doughty and Protos load measuring systems we believe that it is important to show as many aspects of safe rigging in general regardless of the brand or country of origin. And making people from our industry aware of important day to day rigging which can result in unexpected outcomes.”

“Among others it was shown by using load cells how loads can react on a truss which is suspended from three chain hoists and by moving the load over the truss, which can happen when hoist are not running at the same speed, which can happen when old and new hoist are used mixed or have different loads to carry. These and other factors are all creating drastic loading variations and which can result in overloading the hoist and truss.”