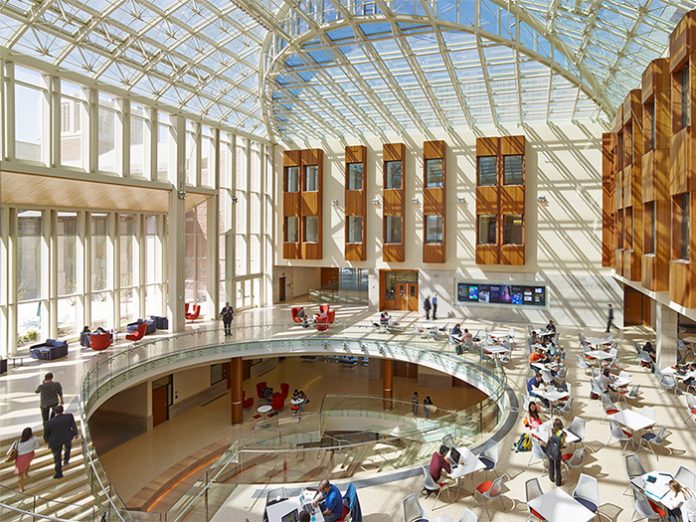 Founded in 1917 as the School of Commerce and Finance, the Olin Business School at Washington University in St. Louis was one of the first business schools in the United States. Olin’s Knight and Bauer Halls offers large tiered and flat classrooms and converging around the Frick Forum, a three-story glass atrium that hosts town-hall meetings, speakers, and other events. A broad central staircase that also serves as casual seating rises to the second floor. Except for video soundtracks, the sound system mostly reinforces speech.

The ceiling-mounted point-source loudspeakers that were initially installed simply couldn’t handle the job. “The coverage was okay but the installers were forced to place the speakers in the wrong location, behind the mic line, so they had problems with gain before feedback,” recalled design engineer Tom Blake from AVI Systems.

“This was our third project with ICONYX speakers, and we had great results in the other two,” noted Tom. “We used ICONYX loudspeakers in the auditorium in the same building four years ago, when the building went up. The key is that the capabilities of this speaker fit the application.” Since the main purpose was speech reinforcement, and the Renkus Heinz IC8-RN’s range extends down to 120 Hz, subwoofers weren’t required.

The Renkus-Heinz IC8-RN supplies eight four-inch coaxial transducers, each with three high-frequency tweeters, along with eight amplifier and DSP channels. Each IC8-RN generates up to four steerable beams with multiple acoustic beam centres and beam control down to 800 Hz. The beams cover the steps and second floor precisely while minimising reflections off of the atrium’s extensive glass and other hard surfaces. The speakers’ 150° horizontal dispersion up to 3 kHz enables the system to fully cover the broad stairs.

A BSS Soundweb London BLU-806DA DSP manages the system, which also includes four Shure wireless mics and a Shure podium mic. “We’re going Dante into the BSS,” Tom detailed. “But I ran analog to the IC8-RNs, rather than Dante, because we also did 11 classrooms with full AV control, and I didn’t have room to put the speakers on the network.” Two password-protected AMX touch panels enable authorised staff to control the Renkus-Heinz system.