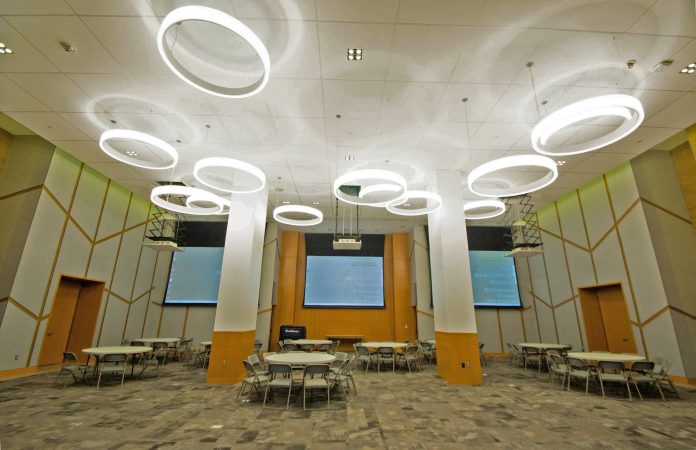 A leader in the teaching of healthcare since 1824, Thomas Jefferson University has a detailed history behind it and an ever-changing legacy ahead. With six healthcare orientated colleges including the renowned ‘Sidney Kimmel Medical College’, the university’s buildings have evolved to suit its changing needs with the Alumni hall being no exception.

Last year, part of the Alumni hall was changed from a small medical museum to a multi function room accommodating events, hosting dinners and showcasing entertainment. However, keeping with the university’s history whilst creating this new space would be no easy task.

Advanced AV system integrators of nearby West Chester, Pennsylvania were the ones chosen for the challenge. Upon first inspections, Advanced AV’s account executive Rich Diperstein described the space as “a large echo chamber with brick walls except for the back wall, which is glass… its a 50-by-50 foot box, and in addition to very hard surfaces it 20 foot ceilings.” With these unforgiving acoustics in mind, a Renkus-Heinz steered beam system was the obvious choice for the team over at Advanced AV.

The system is comprised of Renkus-Heinz Iconyx-series IC8-R-II digitally steerable line arrays. Featuring eight four-inch coaxial transducers, each with three high-frequency tweeters, the IC8-R-II provides up to four steerable, individually shaped beams. Advanced AV’s team directed the two IC8-R-II systems toward the glass rear wall, carefully aiming the beams to deliver the sound to the audience while avoiding the hard surfaces. With large proportion of the events in the room involving presentations, speech intelligibility was the primary concern for the Advanced AV team. The system is managed with a BSS Soundweb London BLU-100 DSP, where Audio is auto-mixed by the DSP unit therefore meaning a separate audio mixer is no longer needed.

However, it wasn’t long before more challenges were presented as installers were forced into a change of plans: “Renkus-Heinz perfectly colour-matched the speakers to the wall, and the IC8-R-II is slim and low profile, so the speakers are unobtrusive,” Diperstein explains. “The client was very happy with that. But unexpected architectural considerations prevented us from placing the speakers where we originally wanted them. Instead of mounting them back against the wall, we had to use brackets to mount them to the side of the walls.”

Beam steering enabled the team to account for the acoustical considerations of relocating the speakers. Sound wasn’t the issue. But the brackets made the carefully camouflaged speakers noticeable. “Fortunately, we found a way to fabricate a cover for the brackets,” Diperstein relates, “and that resolved the issue.”

“They love the space now; the sound is amazing,” confirms Diperstein. “We were confident that ICONYX would be the right choice, and the IC8-R-IIs easily met our highest expectations!”

In conclusion, the Renkus-Heinz system has gone down as a big success for the university, combining carefully camouflaged components with the traditional historic aesthetic that is ever present at Thomas Jefferson.