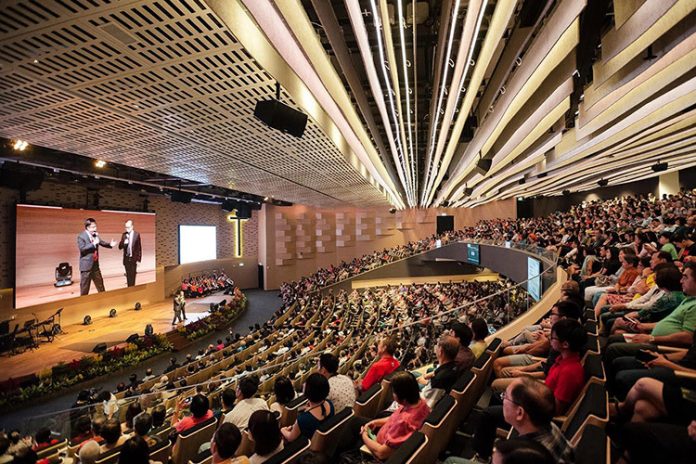 Grace Assembly of God Church (AOG) has set up on Singapore’s Tanglin Road back in 1958. Starting out as a small mission church for 30 to 40 children, it grew into a multi-generational family church of about 4,000 worshippers and today runs 13 services on any given weekend.

Throughout the years, AOG had faced a constant shortage of space and many initiatives were implemented to accommodate the growing congregation — leading to the idea of redeveloping the existing building. When the go-ahead was given, the church wasted no time and assembled an outstanding development team under the new leadership of senior pastor Calvin Lee.

With one large hall on two levels as the main sanctuary and three smaller worship halls, along with offices and other rooms, a premier sound system was a pre-requisite, and set in the ‘engine room’ is heavy artillery from Powersoft.

Robert Soo of Cognet Acoustics was appointed as the AV consultant, with Electronics & Engineering Pte Ltd (E&E) awarded the tender for the supply and integration of systems. “For the main hall, I proposed a point source system rather than a line array for two main reasons,” Mr. Soo explained. “It would not only give much better control over the various sections of the two level worship hall, but would also ensure an unobstructed view of the three large LED video walls at the stage front. As the ceiling height is low for the other three smaller halls, point source was the only way to go .

He adds, “We also needed a quality power amplifier system that was consistent, reliable and would drive the EAWs efficiently. So when E&E proposed the Powersoft K and M series, the decision was almost a no brainer.”

The product selection was made judiciously, with thirty mission critical amplifiers assigned to drive the different parts of the EAW system. These comprised the powerful K series in the form of four K2, three K8, and a K10, as well as a M28Q, two M14D, twelve M20D, five M30D and a pair of M50Q.

A series of five Yamaha CL mixers have also been provided for mic mixing. All are run on a network, so that any mixer in any hall is able to access any input source from any hall. This makes it really powerful and flexible for the operational crew when running their events and programs,” summarises Robert Soo.

He also added that the Powersoft amplifiers had been working flawlessly in driving all the loudspeakers efficiently, adding to the new immersive experience that the sound system and visuals afford the congregation. “This is enabling them to better appreciate the sermons and service proceedings,” he summarised.