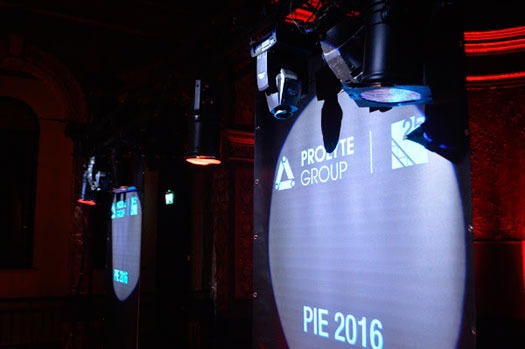 During its yearly PIE event (Prolyte immersion event), which was held in Amsterdam from 10-12 January, Prolyte honoured its distributing network by handing out awards for highest turnover levels, non-turnover related achievements and awards for special contribution.

Starting on Sunday with a special dinner and party to celebrate its 25 anniversary year, the event started on a high note.

With over 110 people attending, both key personnel and distributor representatives from all four corners of the globe, the atmosphere was lively and animated. Mixing dinner with award ceremonies, the night started professionally and progressed to a perfect networking event.

Over the course of the next two days the network was informed on product updates, marketing and sales strategies and the new Prolyte factory.

Feedback sessions on several topics gave all participants as well as the Prolyte team a platform to share and discuss ideas.

Ralph Stockley, Commercial Director commented: ”It’s important for us to show our distributors how important they are for us and to honour their efforts. Of course this is not only for those awarded, we’re well aware that our complete distribution network promotes and supports Prolyte on a daily basis, one of the facts that makes our brand so strong. We’re really proud of that fact.”

For both the distributing network and the Prolyte team it was a great way to kick-off its 25th anniversary year, facing the future together confidently.