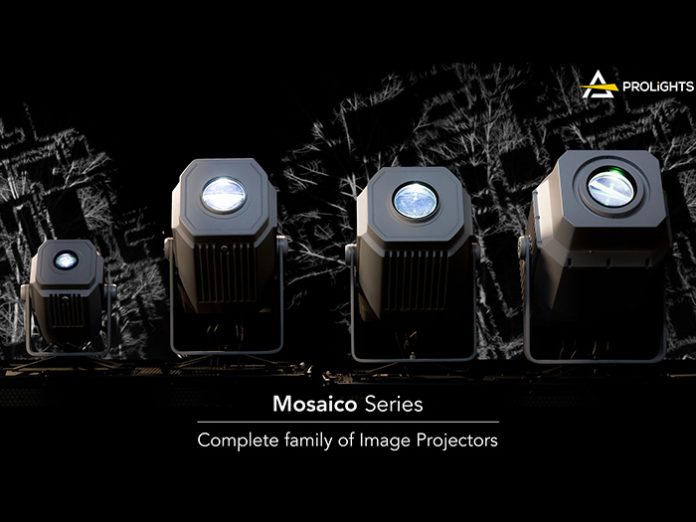 PROLIGHTS has extended its range of image projectors by adding the Mosaico L to the family. The newly added fixture is a bright outdoor LED gobo projector, designed for long-range images, textures and logo projections.
The Mosaico range has an IP66 rating for long-lasting outdoor installations. The Mosaico L has a 300W high-power white LED source and an incredibly bright 11,700-lumen output.
The exceptional 7 to 49-degree zoom range makes the Mosaico L versatile for near-field or long-throw installations. The new fixture has an enhanced optical system that boosts the light output, making it more efficient while making the gobo images crisp and focused on all positions, including the centre and the edges of the projected picture. It also prevents distortion or bending of the image at large zoom angles.
The Mosaico L comes with an extensive set of features, including a rotating animation wheel, seven interchangeable gobos, seven colour filters and motorized framing shutters that focus precisely on any projected area.
The Mosaico family includes four fixtures: The Mosaico Jr, Mosaico, Mosaico L and Mosaico XL. Although their core features may differ slightly, they all have seven layers of effects, enabling thousands of different looks by combining the several effect parameters.
The family also shares the same connectivity options, including DMX and RDM operation, Wireless DMX, and an innovative stand-alone operation with DMX recording and editable playback options.
prolights.it