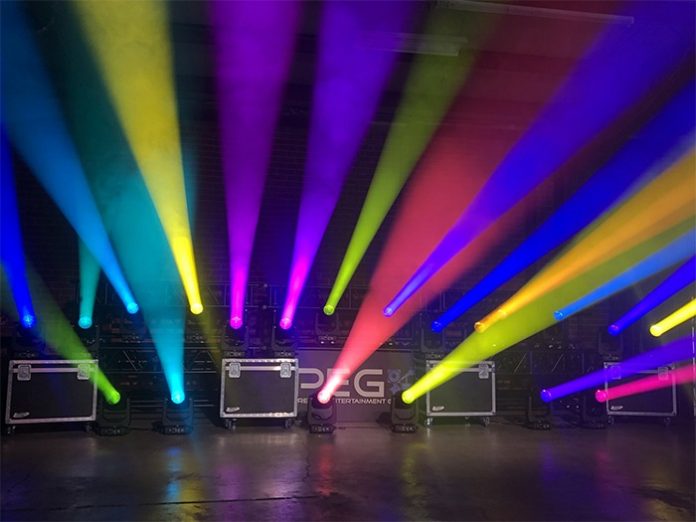 “Our goal is to prep our inventory and staff so as soon as things are ready to start up again, we can hit the ground running,” stated Premier Entertainment Group President and Owner, Dave Guiler about a recent acquisition of Elation Fuze SFX LED moving head luminaires. “That was the goal behind the purchase, to get things together easily and quickly so when this is over we don’t have to worry about any missing pieces.”

Located in Dothan, Alabama, in the southeast corner of the state, Premier Entertainment Group recently acquired 20 Fuze SFX Spot FX fixtures along with other gear as part of a strategy that will see the event services provider put more focus on the touring market. In order to be well prepared once the COVID-19 restrictions have passed, Dave has put together lighting packages designed to quickly fill a touring rider, truck friendly gear that will also work well on festivals and one-off shows.

Dave founded Premier Entertainment Group in 2007, when he was just 18, and has grown the company since. He bought into Elation gear about five years ago with the Platinum FLX and also keeps Fuze Wash 350s in his inventory. Currently 85% of his moving heads are Elation brand.

“We had the Platinum FLX, which were phenomenal lights, but for the caliber of shows we were doing, it was a bit much as we don’t always have 50 or 60 foot trims,” Dave commented. “The Fuze SFX is high quality and versatile like the FLX but with a 300W LED source it has a smaller footprint. For power consumption and output, it’s exactly what we needed and fits in well with the size of events we’re doing.”

A unique combination of spot and effects fixture, the Fuze SFX is a compact multi-purpose LED luminaire with CMY colour-mixing, 18 carefully designed gobos and a 4.5° to 38° zoom. “Every bit of the feature set was exactly what we needed,” said Dave. “We wanted a CMY fixture with a super wide beam angle that could also zoom narrow to get a nice beam when we need it and I love the aerial effects of the gobos. The SFX nailed it on the head.” Besides a good fit for mid-size festivals and shows that PEG specialise in, Dave said the SFX is also a good fit for a smaller performance venue near their shop where they do a lot of shows, as well as a new venue in town that’s just getting its feet off the ground.

Dave worked with Elation manufacturer rep firm Freed Sales, who briefed him on the Fuze SFX and demoed the light for him. “They are probably the best rep we’ve ever dealt with,” he said. “If we’re curious about a light and how it stacks up against another I can hit [Freed Sales President] Dustin Pesnell up or our regional rep Todd Small and they’ll either send it to us within a week or come down for a demo. They’ve been absolutely phenomenal as far as having a good partner, also with ADJ product.”

The Fuze SFX fixtures have already seen a demand as they have been rented to a recent dance recital filming. Bluewood Productions, based in Huntsville, AL, requested a powerful light to cut through the theatrical wash while still delivering mid-air visuals to be caught on film. The SFX did just that and has already secured future bookings for the fixtures. Both PEG and their production partners couldn’t be happier with the acquisition.