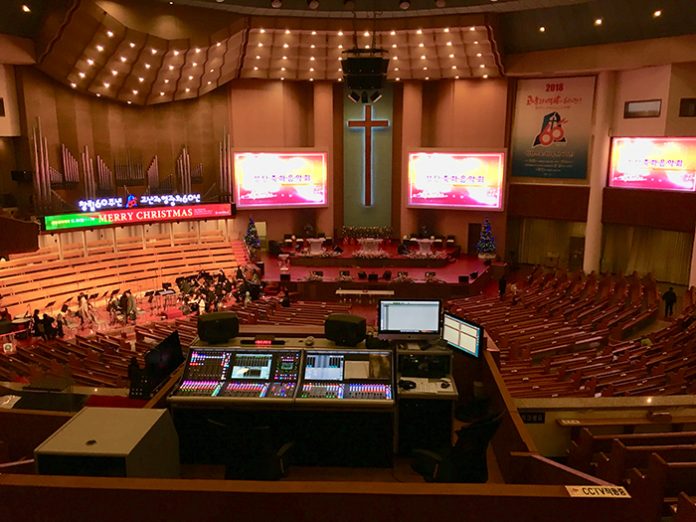 Flexibility and stability were cited as contributing factors, but performance and price sealed the deal on Powersoft’s X Series, over two other leading amplifier manufacturers. An industry standard for touring, but a powerful and stable solution for installation, Powersoft’s X Series is set apart by its new and innovative level of signal processing, providing routing and mixing matrix, as well as multi-stage equalisation with raised-cosine, and TruePower limiters.

The system installation was carried out with no disruption to worship, as work continued either side of the service day. Once the space-saving, 2U X4’s were in place a Dante network was created to alleviate the use of the pre-existing DSP. Powersoft’s ArmoníaPlus then took over the reins and tuned the entire speaker system. Armonía handles complete monitoring of the amplifier and speaker status from anywhere, which is useful when the distance between the amp room and the FOH is too great – as it is in Yeouido Church.

The system set up and tuning was all handled by Choi and ‘very intuitive’ thanks to Armonía. He also found the matrix nature of the Powersoft X4, ‘assisted greatly with installation and adjustment’. He added: “The matrix function, allowing you to send one or more inputs freely to all outputs, is very attractive.” Changyu worked with Yeouido’s sound engineer, Joung Kim to organise the input and output channels and to stabilise the system.

Kim states: “The Powersoft products are very stable and reliable. The control of the system now is very simple, with no need to manipulate the system at all now the set-up is complete. Power on / off is available remotely which is very convenient and all we need to do is monitor the system status.

That the amplifiers support their own Dante network is invaluable as it now bypasses the original network. I’m very happy with how the installation went. The Powersoft X Series is designed with excellence and the hardware is very stable. The next important install we do here will definitely by with Dasan SR and the specification of Powersoft was the right choice for us.”