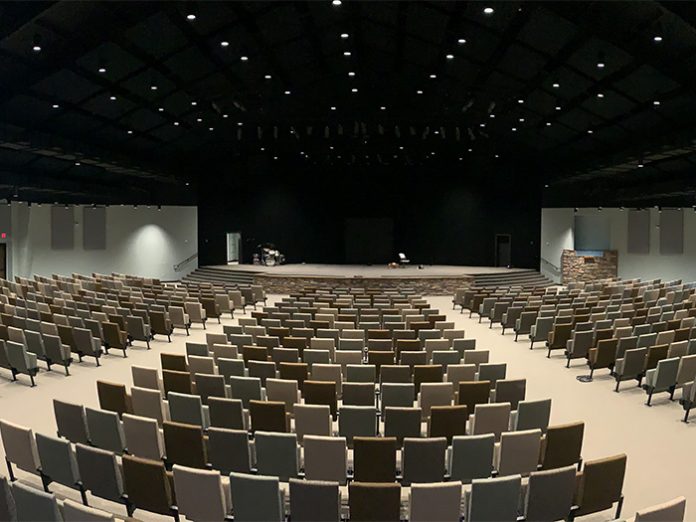 In the time since it was established in 1983, Northside Baptist Church (NBC) has grown from a small group of people meeting in a living room to its current membership of 1,600. With construction now complete on its new home, the church’s management decided that it would need an audio system that could match the quality of such grand surroundings.

“Since it was a new construction project, we didn’t know what the best fit for the space would be, regarding the sound system,” said Bob Slie, media director at NBC. “Our worship pastor and I attended WFX 2019 in Orlando, Florida, as they had almost a dozen audio manufacturers come in and set up in the same space, which allowed us to compare the different systems impartially. We were absolutely blown away by TW Audio’s then-new ELLA system, which was powered by Powersoft amplifier platforms. We met with Mick Whelan from TW Audio and began a relationship that would take us a year and a half down the road to their first US installation in a church with ELLA and Powersoft.”

Slie contacted local company, Arrendell Media, to supply and install the system. The company’s owner, Brian Arrendell, liaised with both Whelan and Slie in order to ensure that the system was installed to the exact specifications sent from TW Audio.

“We also had Rick Woida from Powersoft come in to help complete the installation by setting everything up and tuning the system along with Mick,” said Slie. “They spent three days with us getting everything set perfectly, including having our band come in on the final day to put the system through its paces. This final step of having someone here from each of the two companies was integral to getting the sound we required.”

Whelan and his team from TW Audio designed the ELLA6 system for the church’s sanctuary space. The PA consisted of 22 ELLA6 speakers and six VERA S32i directional subwoofers hung in the centre of the room to provide the low-end energy for the space. The design for the room was a main array of eight speakers per side, as well as two ELLA6 speakers hung below the subwoofers as a centre fill for the first couple of rows. There was also a pair of ELLA6 speakers installed on the far left and right walls as outfills get the clarity and vocal intelligibility to those seats.

“It was Mick from TW Audio who chose Powersoft,” said Arrendell. “This was our first experience using Powersoft and I have to say that these amplifiers are amazing. Their capabilities and the built-in monitoring features are great. Of course, I love all of the bells and whistles, but the actual sound of a system is always the determining factor in a product choice for me.”

Powersoft’s Quattrocanali 8804 Dante + DSP amplifiers were chosen to drive the system at NBC; a choice which was well-received by everyone concerned, given how impressed they had been with the products at WFX 2019.

“The Quattrocanali 8804 Dante + DSP amplifiers were great for this application for a few reasons,” said Arrendell. “The Dante inputs were great to interface with the Allen & Heath Avantis Dante I/O at front of house. The fact that it will easily handle different impedance loads on the same amplifier really helped, while the rational acoustics Smaart API was great for the system tuning process. Rick from Powersoft was there to tune the PA system and he was great to work alongside with. He was very helpful, and he showed me around the ArmoníaPlus control platform.”

Slie added: “The amps from Powersoft produce pristine sound and are far more controllable than any system I’ve ever worked with. The ability to network, monitor, and mute our system from one location in the sound booth gives us complete control over our output. We were coming from an old system of 3U and 4U amps that are extremely heavy, low powered, and had no options for monitoring the output from the control desk. The Powersoft amps are not only smaller and lighter, but unsurpassed in the quality of their onboard technology.”

Although Slie and his team were able to have several band practices beforehand with zero audio issues, the church’s return service was held on Sunday 14th February, which allowed them to hear what the system was capable of in a real-world setting for the first time.

“We’ve been so excited for our church members experience the quality of sound we have available now,” Slie said. “I have been at this church for over 21 years, full time, and I can honestly say that I have never heard our music sound as good as it does through our new TW Audio / Powersoft system.”

“We were really impressed with this project overall,” added Arrendell. “From the design process and throughout the installation to the end result, which was a really well-designed audio system. The TW Audio and Powersoft combination turned out greater than we could have imagined. We’ll definitely be considering them highly for any future projects.”