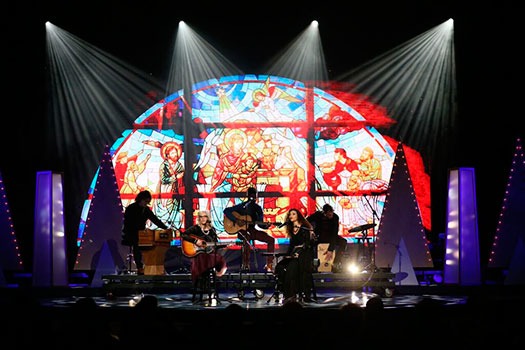 Presenting contemporary worship services that are alive with energy and creativity, Church of the Highlands in Birmingham, AL, has grown since its creation in 2001 into a congregation with more than 30,000 members. Currently operating with 12 satellite campuses, Church of the Highlands produces an annual Christmas production designed to bring the congregation together for an evening of song and celebration. With 11 performances scheduled for the production, Experience Director Brian Worster and Assistant Production Manager, Scott Waldrep, must create a worship environment that embraces the majesty of the evening which they did using 96 FLEXLite 3.9mm LED video tiles from Nashville-based PixelFLEX.
“This is an annual production for the Christmas services and it typically grows a little bit each year,” said Scott. “Since we normally have video elements in our Sunday services, we wanted to incorporate an LED video wall into the Christmas production as well. When looking at the products available, we needed a high res LED video wall to creatively set the scene and tell the story throughout each piece of the service. Plus, it had to look good on camera for the HD camera shots which is why we chose the FLEXLite 3.9mm LED video tiles from PixelFLEX.”
As the largest church in the state of Alabama, Outreach Magazine also named Church of the Highlands the fastest growing church in the United States. So when Scott and Brian began planning the Christmas production, they really wanted the LED video wall to act as a focal point onstage that could highlight the musical performances, display pre-programmed video, and also serve as the backdrop while the pastor delivered his message to all in attendance.
“In regards to the LED video wall, we were essentially looking for a canvas to paint on,” explained Scott. “We wanted a blank slate that wouldn’t lock us into a particular look or design so we decided to demo a couple of different LED video products while identifying a couple of specific requirements. First, it had to look great on camera because this was going to be hung directly behind our pastor while he spoke and the bands while they performed. Second, it had to be built well so we didn’t see any of the gaps or spacing in between the LED panels. Lastly, it needed to load-in and load-out quickly and easily, and so after all the demos, it was FLEXLite product line that would work best for our production.”
FLEXLite from PixelFLEX is an economical solution to traditional LED panels which can be installed and dismantled by one person, making them ideal for the house of worship market. With its bright, dense display and high refresh rate, incorporating FLEXLite it into any worship service takes no added effort, and its easy access back panels allow for simple on-site repairs without the hassle of removing the entire back of a tile.
“For the load-in we had four crew members from our satellite campuses and the FLEXLite was quite easy to put together,” added Brian.  “The way they connect is both durable and simple, and it didn’t take long for the panels to be ready for programming.”
Scott added, “We really enjoyed how easily the FLEXLite tiles locked together and once we got our hang points we were able to quickly get the video walls in the air without having to make any adjustments.”
For the production, Scott and Brian created five separate video walls using the FLEXLite LED tiles. With a centre wall that measured 26’ 8-inch wide by 13’ 4-inch tall, and four outer walls each measuring 3’ 4-inch wide by 13’ 4-inch tall, it was now time to fill their blank canvas with the video content desired.
“To give the set a unique look, we decided to break up the LED wall into the five different sections that had automated lights vertically hung between each video screen,” Brian explained further. “Once the LED wall was all dialed-in and gen-locked, it looked absolutely incredible throughout the production. The background was very crisp and clear, the colors looked great, and there was no type of moray effect between the HD camera and the LED wall. There were absolutely no maintenance issues and it really was a beast throughout the entire run of the production.”
Scott agreed, “Once we had the LED wall set-up we were pretty much ready to go. We had to do some basic color correcting to dial it in, but for the camera’s we didn’t have to adjust for shutter speed or anything else. With the FLEXLite 3.9mm product our cameras had just the right amount of depth of field and I was very impressed with how sharp and clean everything looked on camera and for the live audience.”
With the Christmas production now complete, Brian and Scott were pleased with not only the performance of the FLEXLite LED video tiles, but with the support that came with them.  Having previously worked with the PixelFLEX team on a separate occasion, it came as no surprise that the blank canvas they desired, quickly became a creative reality.
“I was first introduced to the PixelFLEX line of LED video walls during a freelance project and I really like their product lines,” admitted Brian. “They have a great team of talented professionals who are ready to assist with whatever you may need, and the FLEXLite LED video wall definitely brought an intensity to our Christmas services that we did not have in years past.”
“In my opinion, the biggest win for us this year was being able to paint the blank canvas with any graphic design element we needed,” concluded Scott. “Through the FLEXLite LED video walls, we painted a church with beautiful stained glass windows, a majestic big city background, and a myriad of colourful motion graphics to accentuate the music and the message which in the end is the true point of the production.”
www.pixelflexled.com