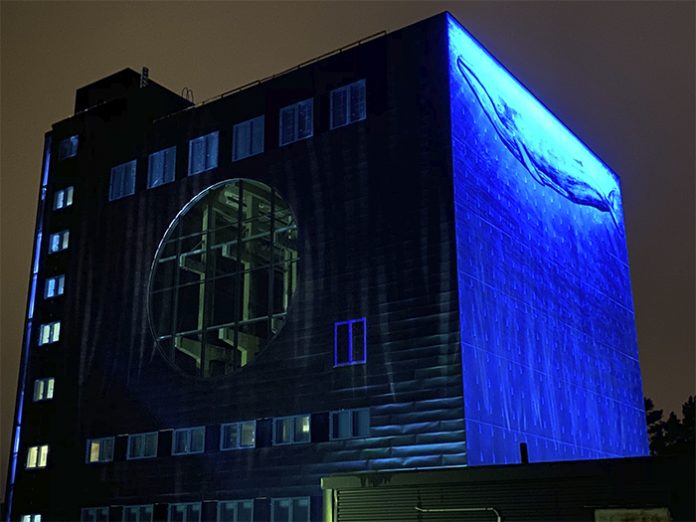 Originally constructed in 1973, Piispantorni is the tallest building in the Finnish city of Kaarina and offers a dazzling view of the nearby Gulf of Finland from its upper floors. Formerly owned and utilized by Finnish brewing company Hartwall, the building’s new owner recently renovated the building to offer commercial office rentals to professionals in the Turku region of Finland. As part of the renovation, the building received a completely new steel façade featuring a stunning, 82-foot-long mural of a life-size blue whale titled “Big Blue” by artist Mauri Kosonen.

“The owner wanted to enhance the new façade of Piispantorni with a lighting design that reflects the seaside nature of the city,” said Jami Lehtonen, Sales Manager, Studiotec Oy. “The design features animations that look like ocean waves, which goes perfectly with Mauri Kosonen’s ‘Big Blue’ whale painting. The motion of the waves is created entirely with Martin Exterior Projection 1000 fixtures, which were chosen because of their exceptional power over distance and built-in animation engines. The lighting design was created specifically with that fixture in mind, and it did not disappoint—everyone involved is very happy with the final result.”

Turku Energia deployed a total of 11 Martin Exterior Projection 1000 fixtures to cover all four walls of Piispantorni in colorful moving animations, producing the illusion that the building and its “Big Blue” whale mural are underwater.

The Exterior Projection 1000 is a large-scale outdoor image projector that gives architectural lighting designers the ability to program textures, patterns and graphics with the fixture itself for limitless creative exterior designs. In addition to providing sharp image quality, dynamic features and powerful reach over long distances, the outdoor-rated LED projector is able to operate in temperatures from -22°F to 113°F and its robust, vandalism-proof IK08- and IP66-rated aluminum housing is surface-treated to protect it from corrosion.

“With exterior architecture projects like this, protection from moisture is a big concern, especially because Finland is experiencing a harsh winter this year,” continued Lehtonen. “The Exterior Projection 1000’s IP66 rating keeps the fixtures working in extreme weather conditions. The extended warranty offered by Martin also guarantees peace of mind that they will replace any of the fixtures in the rare case of equipment failure.”

The Piispantorni renovation and exterior lighting design was completed in the second half of 2020, and the stunning vision was unveiled on December 31 at the stroke of midnight, ushering in “Big Blue” as the new face of Kaarina for 2021 and beyond.