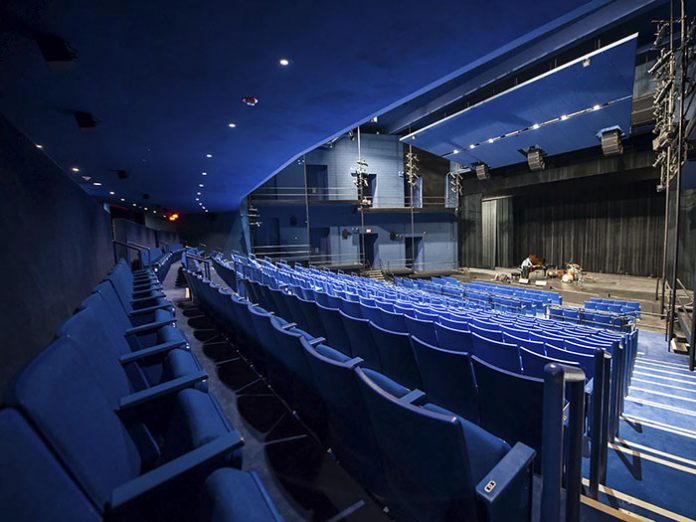 Designed by set designer Ming Cho Lee, the mid-sized PepsiCo Theatre has a large stage allowing for exceptional adaptability. It also makes an ideal venue for film screenings, with comfortable seating, a rear screen projection bay, and fully digital projection capabilities. A $730,000 grant from locally-based beverage giant PepsiCo in 2016, combined with additional donations, allowed for the complete renovation of the theatre—from the seats and the carpeting to the sound, projection, to lighting systems and critical backstage infrastructure.

The new PA setup for the Performing Arts Centre of Purchase College’s second largest venue features three matching arrays of four L-Acoustics ARCS WiFo enclosures—two ARCS Focus over two ARCS Wide—flown in an LCR configuration through cutouts in the theatre’s acoustical cloud and powered by a total of three LA4X amplified controllers housed in an LA-RAK in the third-floor catwalk. In addition, four SB28 subs are hung in pairs on either side of the 55-foot-wide proscenium and driven by a single LA12X, while eight compact 5XT coaxial speakers powered by a fourth LA4X are used to address the rear of the 713-seat space’s under-balcony areas.

“The combination of the acoustical cloud and side platforms made finding a suitable system fairly challenging; we could not make too much of a visual impact, or have the system shadowed by the side platforms,” described Performing Arts Centre of Purchase College’s Production Technology Manager Justin Herminghouse, who spearheaded the new system’s design.“Many of the variable curvature systems that we looked at were just going to be too long and we could not find a point source that would give us the even coverage that was one of our prime requirements. The ARCS WiFo system was able to ideally combine even coverage with an unobtrusive presence.”

A major constraint of the design process was that Justin was not able to actually bring any systems into the room and listen to them in the space, or experiment with source placement. This meant that the entire design process had to be done as a modelling exercise. “Soundvision was an extremely valuable tool in developing and validating the design,” he shared. “We were able to use the modelling software to produce renderings that our Executive Director could use to present the performance and visual presence of the new system to donors and other non-technical stakeholders. And we were all very impressed with how accurately the predictions in Soundvision matched the actual installed performance of the system.”

“One of the primary goals of the room’s new system was to keep the energy off of reflective surfaces like the ceiling and on the audience, and ARCS WiFo does that exceptionally well,” said Gary Peck, President and CEO of North American Theatrix. “The sharp pattern control of the cabinets is also very effective at keeping unwanted high-end frequency spill off of the stage. The mixture of Wide and Focus enclosures in the arrays is providing highly consistent coverage throughout the entire audience area in terms of both SPL and tonality. The sound now is excellent in every single seat, and the speech intelligibility is very high.”

The addition of the L-Acoustics system was integral to the entire renovation in another surprising way: the four SB28 subwoofers in the system are also integrated into a new QSC cinema system, through the Q-SYS network now part of the building’s systems, adding thunderous low end to enhance films and videos.

“Integrating the L-Acoustics subs into the Q-SYS network and QSC cinema system was very easy, which is another reason we like using L-Acoustics components,” said Gary. “They always sound great and are easy to work with.”

Justin added that the PepsiCo Theatre presents a wide variety of programming in the room, and the new ARCS WiFo system has accommodated it beautifully. “In the past month or so we have hosted, among other things, a mariachi ensemble, the Purchase Jazz Orchestra with Joe Levano, a local ballet academy’s Nutcracker production, and we are currently loading in the Rob Mathes Holiday Concert, with guest appearances by Sting, Vanessa Williams, and David Sanborn,” he said. “The new system has allowed us to meet the needs of a much wider variety of programming that we were able to previously, and the reaction from audiences, engineers, and artists has been enthusiastically positive. Overall, the ARCS WiFo system has proven to be a perfect match for the hall and everyone is very happy with it.”