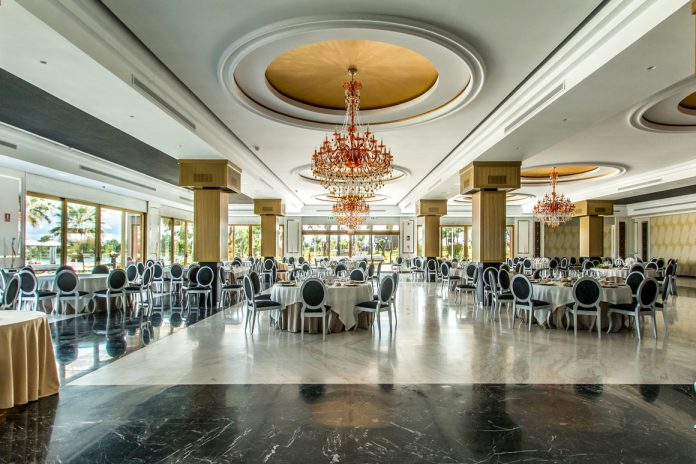 The resort’s management needed to deploy great sound in all areas, but with the versatility to manage each area independently or as groups, depending on the needs of each event. El Palmeral owner Esteban Robledo is a young entrepreneur who is very tuned in to new technologies and knew that the solution was a network-based system.

“In a resort covering such a large area and with so many different zones, the use of analogue technology would obviously have been a mistake. Digital audio networking gave us the opportunity to centralise the control and the possibility to manage the entire system by one person,” he said. “It also reduced the complexity of the installation and would make considerable economic savings, not to mention the opportunity of expanding the installation using the same design philosophy.”

With the variety of areas that needed to be covered, and the distances between them, Talavera de la Reina-based A/V specialist Telsokit chose a Yamaha solution, with an MRX7-D matrix processor as the core of a system covering 12 different zones and with 50 audio inputs.

Chosen for the versatility of its open-architecture DSP and being more than capable of meeting all the client’s needs, the MRX7-D is supported by two MTX3 matrix processors, with two Tio1608-D I/O Rack units for additional inputs and outputs. The entire system is powered by five XMV8280 amplifiers.

“One of the main installation requirements was to route audio from one area to another in a simple and fast way, allowing us to join or separate the zones, according to the needs of each event,” said Telsokit CEO Miguel Angel Aguado.

Throughout the resort, a total of 72 VXS8 surface mount and six VXC5F ceiling loudspeakers distribute ambient music from three MusicCast WXC50DS wireless streaming amplifiers, with a separate WXC50DS providing content for the children’s area. In addition, three laptops connected via Dante Virtual Soundcard supply high quality audio, with none of the background noise typical of analogue audio connections to computers.

Three wireless Line6 XD-V55 microphones are included in the system, which can be used for a wide variety of uses. The MRX7-D’s Dan Dugan automixing ensures that more than one microphone can be used without any need for manual mixing. To deliver the powerful sound needed for the disco, DXR12 full-range, powered loudspeakers and DXS15 compact powered subwoofers were installed.

Bespoke control panels were created in the ProVisionaire Touch app, for iPad-based system-wide control of input sources and volume levels, and ProVisionaire Control Kiosk on a Windows PC with a higher level of access, zone switching and paging. Five DCP4S1V surface mount controllers have also been installed throughout the resort, allowing staff to locally choose the audio source and adjust the volume for each main zone.

“One of the most important features of the system is the ability to control everything from a tablet or PC, meaning the vast majority of expansion work is at software level. This allows the customer’s needs to be easily adapted, without having to add additional hardware,” said Miguel.

But this is just the beginning for Palmeral Resort, as Esteban Robledo explained: “This is a medium term project and our facilities are going to grow year by year. The decision to install a Yamaha audio solution helps to ensure that the results from now through to our maximum development will be a success,” he said.

“We are very grateful for the dedication, understanding and patience that the staff from Yamaha and Telsokit have shown. It is a pleasure to work with such professional people.”