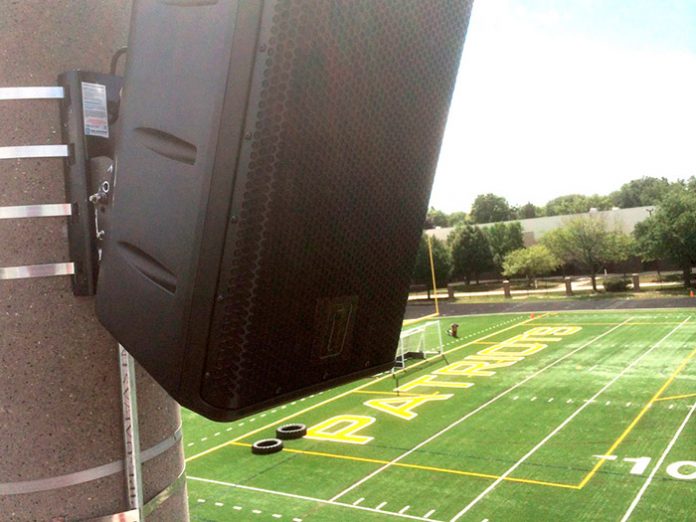 ClearImpact Sound & Event Services, located in nearby Lake Zurich, Illinois designed and installed a state-of-the-art system that would provide the vocal clarity and musicality the school administrators required. The ClearImpact team installed the system right before the beginning of the 2015 season, and it has since been operating flawlessly.

John Rustirasiri, owner of ClearImpact and a veteran live sound and electrical engineer, was impressed with the One Systems 212CIM’s coaxial design and speech intelligibility. Upon hearing the clarity of the loudspeaker, he knew he had found the right product. During the design process, he worked closely with One Systems’ Mike O’Neill and Mike Torlone as well as regional rep Tom Parnell, to ensure the coverage would match the requirements of the school.

“With the old system well beyond its intended operational life, the school decided a full upgrade was in order,” explained John. “We opted to install CIM loudspeakers not only for their direct weather properties and excellent vocal clarity, but also sound containment. In the past, the school would regularly receive complaints from the neighbors during home games. I’m pleased to say they have not heard from anyone since the One Systems loudspeakers were installed. Noise pollution is no longer an issue.”

The ClearImpact team installed six 212CIM loudspeakers on light poles: two to cover the field, and four flanking the home and visitor bleachers. Each bleacher loudspeaker is positioned to cover half of each of the seating areas. Two direct weather 112IM loudspeakers – mounted on the home and visitor press box at the same height as the 212CIMs – were provided to cover areas in the centre of the bleachers. The evenness of the coverage and clarity exceeded the school administrators’ expectations.

Rutirasiri replaced the existing analog system with an all-digital system consisting of a digital mixer and snake, DSP and digital transport where all audio and control run over inexpensive CAT6 cabling between the 500ft span of the two press boxes. The new system also allows seamless wireless mic coverage with no dropouts and wireless iPad control anywhere in the stadium. Built-in redundancy takes care of a the game must go on philosophy with no downtime.

“Even for the season opener with 5,000+ people in the stands, it was clear and loud. Everyone could hear everything without the volume set at the ear-splitting level the previous system required,” John concluded. “These loudspeakers provide the pattern control, throw, fidelity and speech intelligibility needed for a stadia environment in a sturdy and durable direct weather enclosure, plus they are affordable. The school administrators, athletic department, students, parents -and neighbours, are extremely happy. It was also pure pleasure to work with the One Systems team.”