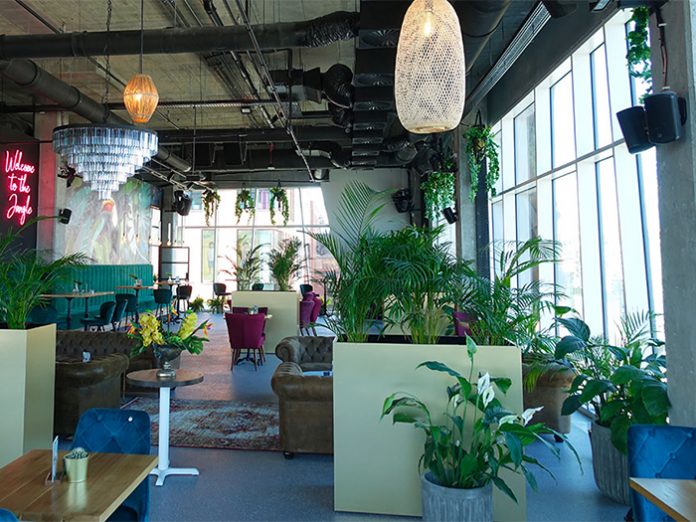 Designing and installing the sound system was Offstage. Przemysław Waszkiewicz, Offstage’s owner, worked with closely Patryk Kozak from Sound Service, who assisted with tuning the system. Together, they created a system that could support Jungla using Turbosound, Klark Teknik, and Powersoft products, supplied by Poland-based distributor SoundTrade.

Przemysław explained that part of designing the audio system was optimizing costs and energy consumption, as it would have everyday use. “The Klark Teknik DM8000 processor sends signals to the Turbosound iQ12 P.A. via the Ultranet protocol, which has simplified wiring and bypassed all unnecessary signal conversions to analog. With this, Turbosound iQ12 was the choice that optimised costs.”

“For energy efficiency, we turned to Powersoft’s Duecanali and the Ottocanali amplifiers,” Przemysław said. “Powersoft offer very energy-efficient amplifiers, in which losses are minimised with power stages working in the efficient class D. While primarily the choice of Powersoft was determined by the energy efficiency of the products, it was also the flexibility of the product that really drew us to it.”

The Ottocanali amplifier, named after the eight channels it supplies, allowed the sound system to be divided into zones within the club. The ceiling speakers, classed as one of the zones, required a 100-volt line, and this was not an issue due to the optional plug-in BatFormer Powersoft created for the Ottocanali.

BatFormers are inserted into the amplifier chassis through a dedicated lid, allowing the conversion of single channels, or all, into 70V or 100V voltage output.

“Thanks to the BatFormer transformer option, it wasn’t necessary to add another amplifier to this line, which saved on cost. The potential contained in single rack space is quite phenomenal, honestly,” Przemysław said.

Offstage has used Powersoft amplifiers from the very beginning. After establishing Offstage in 2008, the first major purchase from the company was a Powersoft LQ2804 amplifier. It then turned to slightly stronger, 2-channel LD amplifiers. Today the main products Offstage relies on are four X8 amplifiers, which were gradually supplemented with T Series models with compatible DSP.

“I consider Powersoft amplifiers, especially the new X and T Series, to be the most universal tool on the market. They have been designed with a rich library of pre-sets that facilitate with a wide range of popular speaker sets,” Przemysław said.

Przemysław believes that there’s vast potential for the X and T Series, the latter of which was released just last year. Both Series ware created with touring and sound system installations in mind and are designed to be flexible amplifier solutions with loudspeaker management. All models of the T Series deliver the same high peak voltage, perfect for projects that require sharing power between several channels. The X Series boasts a single lightweight unit that can offer complete loudspeaker management, with all signal processing functions included.

“The ArmoníaPlus software provides to a system engineer the comfort of almost total control over his work, allowing a very efficient tuning process, even with quite extensive configurations,” Przemysław said. “Overall, we felt the product was a huge success, and we know we can always rely on Powersoft’s incredible products and support throughout the installations we’re part of.”