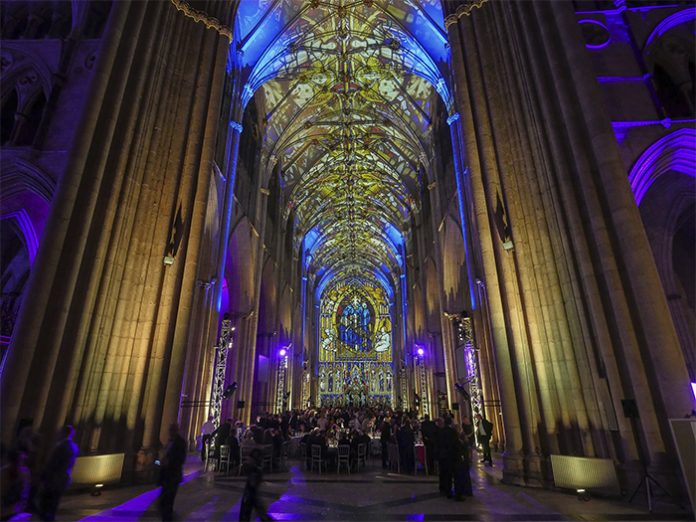 The video projection and sound installation has been commissioned by the York Minster Fund as the culmination of ‘The Northern Lights Dinner’ fundraiser. This involved illuminating the vault of the nave and famous Great West Window, known as ‘The Heart of Yorkshire’.

The Projection Studio supplied the projection system. All other technical infrastructure – lights, audio, rigging, power distribution, cabling, etc. – has been supplied and installed by locally based event and rental specialists Rock-tech Projects Ltd under Phil Adlam.

Ross and Karen undertook extensive research before compiling all the visual and sonic materials into a storyboard. The York Glaziers Trust provided important stained glass image sources. Karen worked with Dr. Matt Townend from the University of York and Prof. Giles Gasper of the Durham based ‘Ordered Universe’ project, to source the multi-lingual texts and translations.

The projected images covered the entirety of the 65 x 20 metre nave vault and the 20 metres wide by 40 metres high West Wall. Ross used eight blended projectors to achieve the roof images and another three for the end wall, all Panasonic PT-DW 17K machines. Ross also devised a customised cradle for the nave projectors so they would point 15 degrees off the vertical and almost directly up into the roof. The three West Wall projectors were rigged on a structure built beneath the organ on the opposite end of the nave. The fully mapped projection was controlled by Dataton Watchout, programmed by Richard Kenyon.

For ‘Northern Lights’, Karen wished to use surround sound derived techniques whilst each word, sound and effect had to be as clear as possible. Rock-Tech’s working knowledge of the venue was invaluable.

A basic framework of Hill Pro Audio speakers in key positions was used for the dinner event and auction. This was augmented with additional speakers, used only for ‘Northern Lights’ to achieve the immersive quality of sound, to aid clarity and provide accommodation for spatial FX related to animated actions within the projection.

The initial basic mix was completed in the studio, but to get a balance and make it work properly in situ, Karen worked on the final mix from the centre of the nave during the nights prior to the event.

It was hoped that the dinner would raise around a million pounds for the York Minster Fund, and after the success of ‘Northern Lights’, the total was £1.4 million.

The public response to ‘Northern Lights’ has been incredible and the event has generated exceptionally high levels of public engagement and positive feedback.

“We were very pleased with the show and were quietly confident that it would be received well by the public,” commented Ross, “But we were all completely overwhelmed by the enthusiasm and extent of the response, and with just how much people appreciated seeing such a well-loved landmark in a completely different light through the piece. We are extremely proud to have been able to work inside the Minster and it’s a testament to the great team of people around us that it’s been such a success”.

Neil Sanderson, director of the York Minster Fund, said, “The Northern Lights spectacular exceeded all our expectations. The combination of projected imagery, spoken word, and music perfectly complemented the cavernous space of the Minster and using imagery of the medieval windows, the installation brought a whole new audience to the eternal truths they contain. The reaction of the sell-out crowds was testament to the quality of Ross and Karen’s work”.