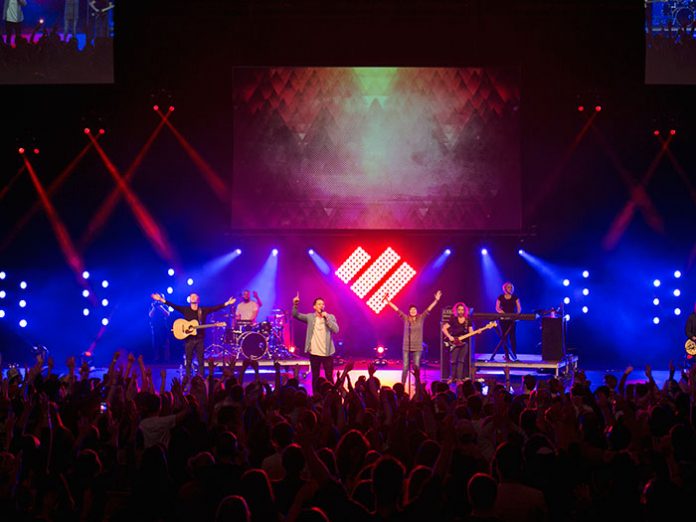 Establishing an identity with young worshippers is essential to the success of church youth conferences. While many conferences rely on colourful on site banners to accomplish this goal, Love Is Red has taken this concept a step further, putting its logo in pixel mapped lights, using the Nexus 4×4 from Chauvet Professional.

The largest Christian youth conference in the Midwest, Love is Red draws thousands of 17- to 29-year-olds from throughout the Great Lakes region for three days of worship, learning sessions, and music from noted Christian bands such as Elevation Worship, which recently reached No. 1 on the Billboard charts with “Here As In Heaven”. Contributing to the experience at the conference is an engaging light show that is anchored by an impressive centre stage logo display created with Nexus 4 x 4 LED panels from Chauvet Professional.

“We wanted a dynamic logo that could engage people more than something static could, which is why we wanted to do something with light,” said Aaron Cole, Lighting Designer and Director at Faith Family Church, which sponsors the Love is Red Conference. “Since the logo is essentially a heart made of three rectangles, the square Nexus panels were an obvious choice. I loved the idea of having the logo constructed out of something that gave us individual pixel control, and I loved the fat 8-bit style pixels. The logo we created with Nexus packs a punch and looks great as a video backdrop.”

The Love is Red logo is made up 11 Nexus 4×4 panels positioned in three rows tilted at 45° angles. “We pixel blacked out some of the LEDs at the edges of the Nexus panels to get the proportions of the stylised heart logo right,” said Cole, who changes the colour of the logo at different points in the conference by changing the colour of light from the Nexus panels.

Going beyond the stunning Love Is Red logo, Aaron pixels maps the Nexus panels to create varied looks during the conference. “We were able to do some fun 8-bit animation style pixel mapping of the panels just by using the 3D view on our grandMA2 console, using a mouse to physically select the ones we want, and then saving each of those selections as frames,” he said. “That’s how we created a very popular 60-second countdown at the start of the conference on the Nexus panels. It’s also allowed us to wow the crowd by scrolling text across the panels at certain points. It was a lot of fun!”

Occupying a central point position on the stage wall, the Nexus panels were used to accent musical performance during the conference. When they weren’t being used for pixel mapped displays to reflect the mood of a song, the high-output panels were called upon to pump up the energy level on stage by acting as blinders. At other points they provided a rich coloured wash for mellower more contemplative music.

“The panels were a huge part of the stage design during all the musical parts,” said Aaron. “They were centre stage the whole time. Really, they added an extra dimension to the guest artists’ performances. Plus, they were a great way of branding the conference – they got our logo in all of the photos and videos.”