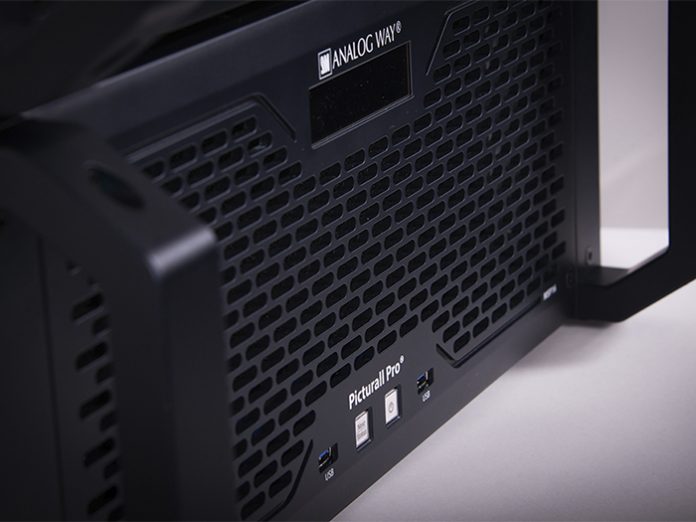 Analog Way has announced major updates in the new software release 3.0 for its Picturall series of media servers. The 3.0 software version available now expands Picturall media servers’ functionalities and provides many enhancements to offer advanced media processing, add flexibility in programming and simplify its use.

The new features include the support of cue tracking, the NotchLC video codec, NewTek NDI version 4.5, and virtual displays as well as a new web-based media manager and a free AWX encoder plug-in for Adobe Creative Cloud.

– The support of cue tracking allows users to freely jump from one cue to another in the cue stack, while taking into account all changes recorded between these two cues and adding them to the final result. Now, with cue tracking, you can directly trigger the cue that is needed in the show and the system checks the cues for parameter changes and applies them automatically. The same result is obtained as if the cues were executed in a sequence.

– The support of the high-performance GPU-powered NotchLC video codec from Notch enables delivery of up to 10-bit color depth giving clean gradients. In its largest configuration, a Picturall media server can playback 1x 8K@60Hz or 4x 4K@60Hz video files with the Excellent encoding setting.

– The support for NewTek NDI version 4.5 technology significantly increases the decoding speed. It offers improved video quality and shorter time required to discover the NDI streams on the network.

– The support of virtual displays allows any physical output to be split into multiple virtual displays that will be seen as completely independent displays in the control user interface. This is a major feature for complex, non continuous LED installations.

– A new free AWX encoder plug-in for Adobe Creative Cloud offers direct AWX export capabilities to Adobe Media Encoder and Adobe Premiere. AWX is a proprietary graphics card accelerated codec for Analog Way Picturall media servers recommended when the performance requirements for the installations or events exceed typical requirements such as 4K60. AWX codec is, for example, capable of handling video playback of over 100 megapixels in one single chassis.

With these new additions, the Picturall series is more than ever the obvious solution to any demanding video playback need for fixed installations, theatres, broadcast, houses of worship, video rental and live events.

The Picturall 3.0 software version is available now for download.