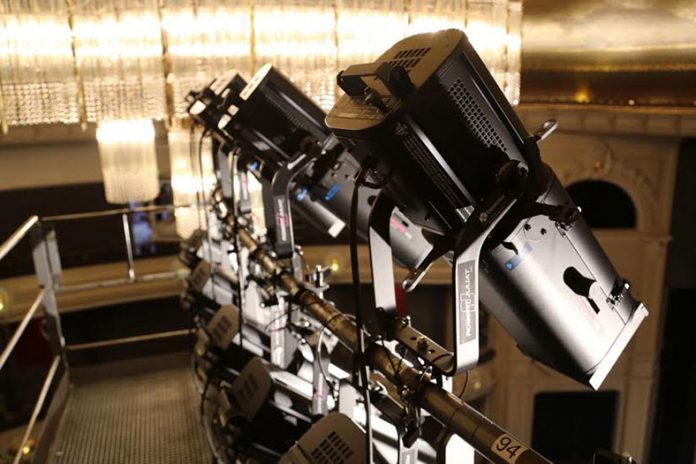 The ‘Koninklijke Schouwburg’, or Royal Theatre, in The Hague has recently taken stock of a large number of Robert Juliat 614SX 1200W tungsten profile lanterns, supplied by Robert Juliat’s project partner for the Netherlands, Controllux, in a major refreshment of its lighting inventory.

Built at the end of the eighteenth century as a palace for Prince Charles of Nassau-Weilburg, the beautiful building of the Koninklijke Schouwburg was transformed into a theatre in 1804 and is now one of the oldest theatres in The Netherlands. It hosts a programme of international theatre productions, musicals, cabaret and dance, in addition to a season from the award-winning Amsterdam Baroque Opera and plays from its own national theatre company, ‘Het Nationale Toneel’.

Having undergone extensive refurbishment from 1997-1999 to modernise the venue, 15 years on it was still apparent that the theatre’s lighting was in need of updating.

Kuno van Velzen, Sales Manager at Controllux previously worked at the theatre and is very familiar with the building and its technicians. He stated: “The team at Koninklijke Schouwburg wanted to replace its large stock of 750W HPL ellipsoidal fixtures with something brighter, and to improve the projection quality.” His experience meant he had a good understanding of what fixtures were needed to fill the team’s requirements.

“I recommended they try Robert Juliat’s 600 Series 1200W condenser zoom profiles,” he said. “Originally we considered the RJ 700 Series 2000W units as well but, as the throw distance from the front-of-house bridge to the stage is relatively short at only 15m, the team decided the output of the 1200W model was perfect over this distance. We also compared them to some profiles from other manufacturers but the superior focus mechanism and the budget set for the large number of units they required resulted in Robert Juliat coming out on top.”

Eighty of the 16°/35° RJ 614SX zoom profiles were delivered at the beginning of the year and are rigged on two front-of-house bridges, with more in the over-stage bridge and side ladders, and the remaining fixtures located in the flies as loose light. The Theatre’s lighting technician, Michel Langenzaal explained how the technicians at this majestic venue are very happy with them, particularly the quality of the gobo projection and sharp shutter cuts – all of which can be in focus at the same time – that the condenser lenses give them.

“The Robert Juliats are superlative and far superior to the ellipsoidal fixtures of before,” agrees Koninklijke Schouwburg’s chief technician, Alphons Verhallen. “Combine this with the greater light output delivered by the RJ’s 1200W lamp, which is a lot more than the 750W HPL, and we can safely say we are extremely happy with the choice, and performance, of our new fixtures.”