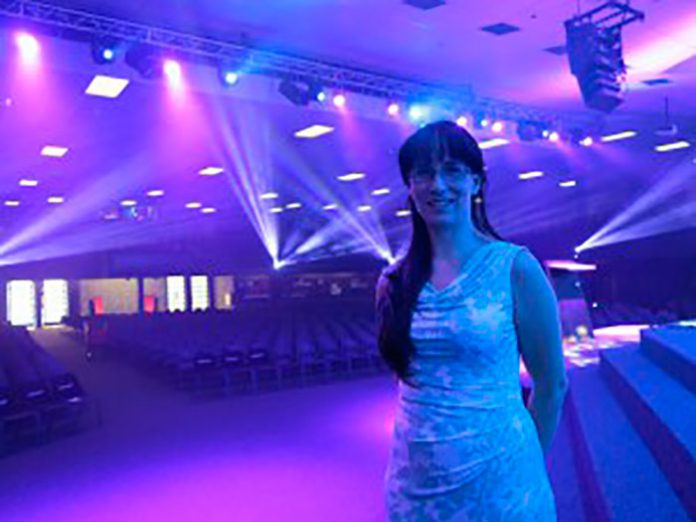 Since she was knee high, Nereen Bradshaw, a mother of two, has attended Maranatha Community Church in Kempton Park, Johannesburg. She is the church’s lighting designer, and in her case, it’s not about the kit but what she does with it. With a basic lighting system at her disposal, she created a truly amazing Christmas Concert at the end of last year. While Sunday services generally steer away from the rock and roll type feel, Nereen has a good eye, creating beautiful moods and looks to compliment the worship.

There is a common thread that runs amongst many lighting designers – a passion for IT. It is no different for Nereen, a computer programmer by trade, who initially joined the church to program and run the lighting on a part time basis in March 2012 (later to do video editing and produce media) and was appointed permanently in January 2013.

With no previous experience and no idea of what the equipment did, Nereen spent a great deal of time just figuring it out on her own, seeing what all the different settings did on each fixture and making a lot of notes. “That was initially a bit scary because I’d have to get something ready for Sunday and I didn’t know what I was doing, actually!” she laughed. “But I’d say after about two or three months I had everything figured out” Some time ago the church had a small control board, but as they added more lighting fixtures they needed a larger control system and opted for a virtual screen with Light Jockey – which Nereen can just about run with her eyes closed.

During 2015, Maranatha purchased six new Robe Mini Points. “They are a lovely addition and are attached onto the balcony ledge in the double volume auditorium. I use them for texture on the back wall and for effects, a bit of eye candy,” Nereen said.

Positioned above the back stage panels are 23 Robe LEDForce 7 RGBW, 10 of which are statically placed over the stage for wash. There are eight Robin LEDBeam 100s over the pulpit and another eight on the stage deck for beam work.

The 10-year-old Robe 575 XT Scanners are still part of the workforce. “They are doing their job and working well,” said Nereen. “We have a general-purpose technician and handy man who will regularly blow out any dust and check the filters. Then when they need a proper major service we send them in to DWR Distribution.”

Lastly there are 10 Martin MAC 250s Wash, most likely purchased from Robert Izzett many years ago.

Nereen works in the mornings, pre-programming the lighting for the three services on Sundays and for the other events that take place at the church. “I listen to the songs, select backgrounds and then do the lighting to compliment the song in terms of movement, speed and colour, usually in that order. So if it’s a very gentle song I go for softer colours, if it’s a more vibrant song it will be funky and fun. On Sundays I also have volunteers. I’ve taught them how to lamp on the lights, open up the sequence panels, and how to run the playback if there’s multiple scenes in a sequence. I’ve given them basic understanding, but I’m always here.”

Her lighting is clean, neat, straightforward, no mess and no fuss. “My husband, Mark, always moans at me because my background matches my lights,” she smiled. “He’ll ask, “Why don’t you do a contrast?” and I’m thinking, “You don’t get it, it’s supposed to match!”

In fact, Nereen receives a lot of input from her husband, who is the Pastor of the music team, especially for special events such as the recent Christmas concert.

“He is the pastor of the music team so he manages the band and is in charge of the creative aspect of what happens on stage in the auditorium while I help to manage the creativity upstairs, along with Pastor Kobus van der Merwe, who oversees all that happens in this department. Mark, Kobus and I chat a lot! Mark tells me what he would like and we try to do it as best we can.”

The sermon lighting is simple and static. The focus is on the preacher who is projected onto a screen. There is a feed to a chapel downstairs where moms with children who are not quite ready to go to Sunday School, can still feel a part of what’s happening in the auditorium. The church also does live streaming of the sermon. In addition, Nereen assists a school on their premises, involved with lighting plays and award evenings.

Maranatha Community Church in itself is a beacon of light offering more than just a Sunday service. Outreaches are plentiful ranging from soup kitchens in the inner city to a team of young school leavers reaching out with plays and programmes at schools and even hospital visits. The church supports a medical clinic and orphanage in Embo, in the Valley of a Thousand Hills, they sponsor a preschool for special needs children in the Grabouw in the Cape as well as supporting a couple who run missions in Iraq, Kuwait and the Middle East.

Nereen said: “The church is part of TCN (The Christian Network), and as a church Maranatha host Progressive Pastoring, where we train pastors in other churches across the country, at minimal cost, in a wide range of topics including: relationship skills, running a ministry, preaching, music ministry, dating, marriage, financial management, Bible study, parenting, overcoming strongholds, living in the power of the Holy Spirit and even personality behavioural profiling. These pastors are then able to take all the information they have learnt and share it with their own congregation and apply it in growing their own churches from strength to strength.”