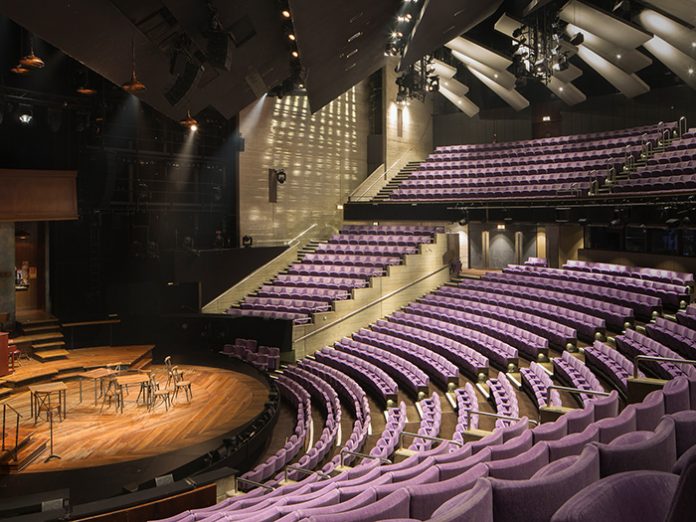 Since the National Theatre‘s initial investment in 42 x Martin Professional MAC Encore Performance LED moving heads for the Olivier Theatre in May 2018, a planned roll-out has seen the venue on London’s Southbank install Martin Professional MAC Encores in the Lyttelton and Dorfman Theatres and add further units to the Olivier. In total, 156 MAC Encore Performance and Wash fixtures are either permanently installed or held in shared lighting resources.

Selected for their feature set, durability and near-silent operation, the roll-out has been supplied by a number of Martin dealers including White Light, Stage Electrics, Hawthorn and Flashlight—all themselves supplied by UK Martin distributor Sound Technology Ltd.

In the Olivier Theatre, the largest of the three theatres within the National, lighting supervisor Jack Williams is preparing to install additional MAC Encore Performance CLD fixtures as the process of replacement and updating continues. “We did a shoot out of a number of CLD fixtures and found this to be the best,” he said.

“Our biggest change was 18 months ago when we swapped the TW1 at FOH for WRM Encore Performances and that gave us a lot more control of the lighting than previously.” Jack continued. “The Martin fixtures are always consistent—they are workhorses and really reliable in terms of positioning. For productions requiring a really intimate feel, the MAC Encores with their near silent operation are generally the only fixtures—alongside a few generics—in use.”

In the Lyttelton theatre, lighting supervisor, Laurie Clayton, indicates the 20 MAC Encore Wash and 20 MAC Encore Performance that now sit over the stage. “Their installation began during the production of War Horse in December 2018.” he said. “We had a lot of discussions with Lighting Designers prior to the installation. We can now do full stage coverage with these and shutter off the scenery as we want.”

The replacement of the older TW1s has been a popular choice, he confirmed. “Everyone is happy with the LED fixtures, and having the Wash and Profile gives us quite a bit more flexibility.” Laurie also highlights the significant drop in power consumption—first from 2K fixtures, then to 750W and now to 600W.

Summing up, he said: “The Encores are so quiet, with great light output and versatility.”

The Dorfman Theatre meanwhile has 12 MAC Encore Wash WRM permanently installed. However, 15 are currently in use for the production of Faith, Hope & Charity at the Dorfman, where Michael Harpur is senior lighting technician.

Michael noted the weight advantage of the Encores. “They are less than 30kg and they have well designed tour handles so can be moved quickly into position.

“We have used them with Top Hats and Egg Crate Louvers and they have worked brilliantly.” he continued. “At the same time they are subtle and discreet in position when not in use—and the fact that both Encores and our Aura XBs are so quiet is a fantastic asset.”

But fundamentally it’s their consistency that gives them the edge. “They just keep on working,” he said. “And the rendering of the skin tones with the warm fixture, making everything look natural, is particularly important in an intimate theatre like the Dorfman.”

Paul Hornsby, the National’s Lighting Resources Manager, said older technology like the TW1 has all but been replaced. “The MAC Encores have settled in well as a workhorse,” he said. “They work fantastically well. We work these fixtures hard in all three venues and we expect them to last eight to ten years.”