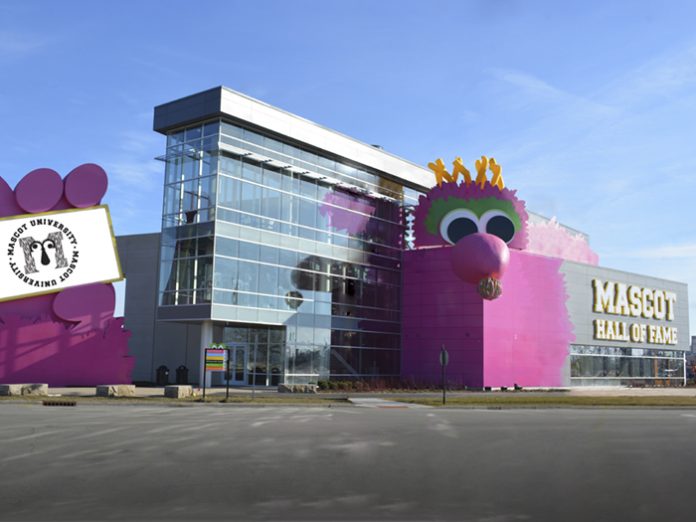 One of the country’s most exciting museums has opened in Whiting, Indiana to the delight of children and sports fans of all ages.  Just 30 minutes from Chicago, The National Mascot Hall of Fame (MHOF) is an interactive children’s museum celebrating professional and collegiate mascots with fun, engaging exhibits that incorporate STEAM (Science, Technology, Engineering, Art and Math) themes from making healthy nutrition choices to the physics of wearing a heavy mascot costume.

MHOF is expected to be a popular destination for school field trips and youth organizations; nearly 1.7 million students are within a 100-mile radius.  It will host special events throughout the year, including mascot boot camps and character appearances, and there will be an annual induction of new mascots voted into the Hall of Fame.  Electrosonic provided AV and control system engineering, installation, programming, commissioning and rack fabrication to support 18 exhibit areas in the 25,000-square foot facility.

“The exhibits bring to light the history of mascots and their important role in sports while tying in the STEAM goals to show that being a mascot is serious work,” said Morgan Rottinghaus, Director, Strategic Partnerships at Electrosonic.

To learn what it takes to be a mascot, visitors begin their journey through “Mascot University” in the Freshman Orientation Theatre where they watch the story of mascots on the big screen.  Then fun sound effects accompany button pushing and lever pulling in the Marvelous Mascot Maker exhibit; a drag-and-drop game called  “Where Are They From?” matches mascots to their hometowns, and the Mascot Moments Theatre shows unforgettable moments that mascots have helped create.

More hands-on experiences come in the Mascot Lab where visitors use a touchscreen to digitally design a new mascot and send it to their homes.  They can also Become A Mascot themselves with 3D face mapping and send home a selfie showing the results.  The Strut Your Stuff audition even lets visitors ham it up on a greenscreen stage and watch as they magically appear composited into video of the big game.

In an activity that everybody wants to try, the T-Shirt Shooter gives visitors giant cannons to see who can launch the most shirts into a stadium full of fans on the big screen.  “The exhibit triggers pan and tilt potentiometers from four cannons, which are encoding the position information going into the game computer, so visitors can point where they want to shoot the virtual T-shirts,” explained Electrosonic Project Manager, Rick Nelson.

For MHOF Electrosonic partnered with JRA in Cincinnati, which furnished exhibit design and project management.  “Electrosonic has enjoyed a long relationship over the years with Jack Rouse Associates (JRA), which we recently displayed through our partnership on the National Comedy Centre in Jamestown, New York and the Spam Museum in Austin, Minnesota,” said Morgan.  “MHOF was super fun to do – we even had Mr Red Legs, the Cincinnati Reds Mascot, deliver our proposal to the JRA Team!

“The Mascot Hall of Fame encompassed all that we’ve done with JRA over the years and centered on our core work for museums: building technology into interactive exhibits and displays,” she noted.

Ron Bunt, Vice President of JRA, said the Electrosonic teams “became family, not just collaborators. During the course of the MHOF project. the engineering and on-site teams thought out-of-the-box and devise solutions to problems that seemed insurmountable at the time,” he reported.

“Electrosonic also managed the project schedule and budget effectively, while still maintaining the design integrity of the project.  The on-site team had capable leaders who established a highly productive work environment and maintained a high spirit of cooperation among the many team players.  Everyone was proactive, hardworking, honest, highly organized and resourceful with a thorough understanding of the latest technologies.”

To support the exhibits and theatres Electrosonic supplied over 40 display devices consisting of Panasonic and Christie projectors, as well as NEC monitors; 10 BrightSign media players; 80 speakers including JBL, Soundtube and Visaton; and 26 computers.  In addition, a theming feature to the MHOF building is a mascot hand holding up a large outdoor video wall; the wall, manufactured by Absen, highlights upcoming events.

Behind the scenes, Electrosonic provided extensive control system functionality for the autonomous running of the building, high-level diagnostics, muting of all exhibits and raising theatre lighting if a building alarm activates, as well as the ability to globally change exhibit audio levels based on attendance levels.

“We also gave MHOF the programming flexibility to transform the lobby area and Furitorium Theater into special use areas for birthday parties and other events and to display different video sources like local laptops, TV tuners and flexible routing for both video and audio,” Rick pointed out.

“In addition, Electrosonic facilitated remote access to Trivium Interactive, the software application developers, to allow pre-loading and updates from their offices in Boston ahead of their team trip to the job site for field testing,” he said.  “Remote access and real-time monitoring of all network devices allow us to diagnose and help to correct any issues that might crop up as well as permit updates to media content without necessarily traveling to MHOF.”

At Electrosonic Jackson Benedict was the Sales Consultant, Clay Fullen was the Site Supervisor and Nino Fusaro was the Director of Project Management.  Elliot Nyfield did the CAD/Engineering with Rick Nelson, who also performed all programming, media management and on-site commissioning.