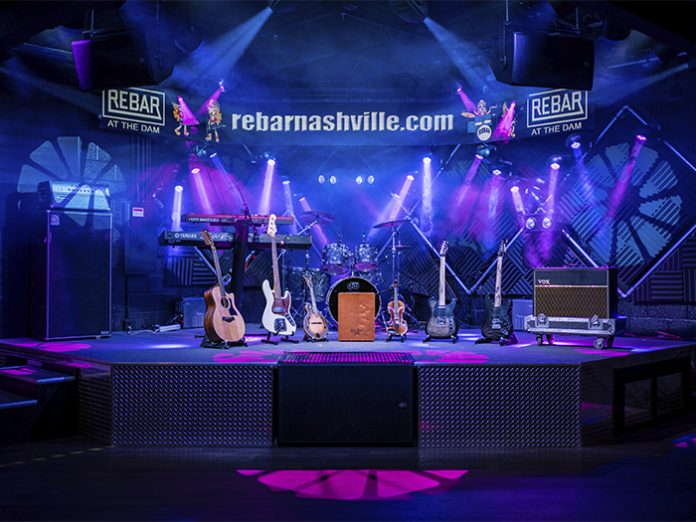 Popular Nashville bar, restaurant and live music venue Rebar At The Dam recently upgraded its stage with a complete new audio/visual system. Featuring a rig comprised mainly of ADJ fixtures, the new setup offers touring quality production to the local performers and visiting artists who play at the venue each week.

Owned and operated by Nashville entrepreneur Rhonda Russell, Rebar At The Dam is a sister location to the original Rebar that has been a staple of Nashville’s Midtown area for the past decade. Located on the outskirts of town beside the J. Percy Priest Dam, the new Rebar opened a couple of years ago and is a considerably bigger facility with plenty of space to host live music. However, bands playing the venue had to bring in their own PA and had very little in the way of lighting, which led Rhonda to look at installing a permanent audio/visual system towards the end of last year.

To help with the project, Rhonda brought in her boyfriend, Jeremy Byrd, who is not only a musician embedded in the Nashville music community but also happens to be the owner and CEO of Elite Multimedia. Founded in 2003, Elite Multimedia is a 360-degree live event production company that provides full-service lighting, audio, video and rigging for tours, concerts and corporate events.

“Obviously, since my girlfriend owns the place, Rebar at the Dam is somewhere I spend a lot of time!” explained Jeremy. “When we started talking about installing production, I had a vision for creating the best stage possible at any bar in Nashville. We wanted to be able to attract bigger acts, but also to create a create a level of production that people can’t see anywhere in Nashville without buying a ticket to a concert. Local bars and venues just don’t have this level of technology.”

The new lighting system that Jeremy installed isn’t limited to the stage, patrons are met by it even before they enter the front doors. Sixteen of ADJ’s 15 HEX BAR IP multi-functional IP65-rated linear LED fixtures have been installed to illuminate the front façade of the building. Each packing in fifteen 12W 6-in-1 HEX (RGBWA+UV) LEDs, divided into five individually-controlled sections, these robust and versatile units are ideal for providing color washes in any environment. The Rebar at the Dam fixtures are hooked up to an ART500 architectural lighting touch panel controller from ADJ’s sister brand, Elation Professional.

“The front of the building is a light grey color,” explained Jeremy, “surrounded by a 2-foot black painted trim, with the doors in the middle. So we installed eight of the 15 HEX BAR IP units on each side of the building, at the top of the black, and put a black aluminium casing around them so that you can’t see any of the cables. The LEDs shine straight down the light grey walls, which means we’re able to change the colour of the building to whatever we want. So on St Patrick’s night we made it completely green, on Valentine’s Day it was pink, when our Nashville Predators are playing we make it blue and gold. Whatever big game is going on in town, or whenever there is a national holiday, we can theme the outside of the bar to match.”

Since Jeremy’s primary area of expertise is audio and video, when it came to designing the lighting rig for the stage he reached out to industry friends for help and support. These included Elite Multimedia’s Director of Operations, Jason ‘Cannonball’ Jenkins, as well as Justin Kitchenman who has designed lighting rigs for heavyweight country artists including Luke Bryan, Taylor Swift, Cole Swindell and even Dolly Parton!

“Justin is a good friend of mine,” states Jeremy. “He gave me lots of useful advice and helped me pick the right fixtures to achieve my vision. When we were designing the system we wanted to create a rig that would be very flexible but that would also easy to maintain. We deliberately choose all LED-powered fixtures for two reasons. The first was to minimise energy usage and avoid crazy electric bills. But the second was to minimise the need for maintenance. I really didn’t want to be climbing up there replacing lamps all the time!”

To wash the stage, Jeremy selected ADJ’s PAR Z Move RGBW, which features a 300W COB (Chip On Board) RGBW LED par mounted on a moving head base. Boasting motorized zoom for a variable beam angle of 9 – 37-degrees, it is ideal for illuminating different parts of a stage at different times in any required color. For Rebar at the Dam, Jeremy deployed a total of twelve of the fixtures, positioning eight downstage and two pairs at either side of mid-stage.

The downstage PAR Z Move RGBWs are interspersed with eight of ADJ’s 12PX HEX static LED par fixtures. With a 30-degree beam angle, each of these fixtures pack in twelve 12-Watt 6-in-1 HEX (RGBWA+UV) LEDs that can be used to generate colour washes from an almost limitless palette. The addition of these static par fixtures allow for colour washes of the stage while the PAR Z Move RGBW units are providing illumination of the performers in white.

Jeremy then choose ADJ’s extremely popular Focus Spot 4Z to serve as the rig’s moving head spot fixture. This is an extremely potent luminaire that harnesses the power of a 200W LED engine and offers a truly extensive feature set. In addition to motorized focus – which is the signature feature of the whole Focus series – the 4Z model also boasts motorized zoom (allowing for a variable beam angle of between 11 and 22-degrees), 6 rotating replaceable GOBOs (plus open), 8 vibrant dichroic colours (plus white) and two rotating prisms (5-facet linear and 6-facet circular).

“Twelve of the Focus Spot 4Zs are spread across the ceiling above the stage and we use them to project GOBO patterns onto the floor of the stage and the rear walls behind the band, as well as for creating mid-air beam effects out into the crowd. We selected this fixture because we found that it had the most versatility at the price point. Having looked at other options, from different manufacturers, and compared feature sets and price points, we felt that the Focus Spot 4Z represented the best value for what we needed. Its 200W LED source is more that bright enough for the space, and the extensive feature-set allows our lighting designers to create a wide variety of different looks.”

The lighting rig is completed by sixteen of Elation Professional’s compact ACL 360i RGBW LED single beam fixtures. These can be used to create traditional ACL ‘fingers of light’ looks in any colour, as well as to generate mesmerizing moving beam effects thanks to their continuous 360-degree pan and tilt rotation. Finally, four of ADJ’s Encore Burst 200 units serve as stage blinders.

“We utilize the Encore Burst 200s to emphasis hits and stops during a song,” explains Jeremy, “and if we want to get the audience’s attention for anything they are a good utility tool to do that. I was particularly impressed by how bright they are, especially considering that they use an LED light source; they really are great fixtures.”

This extensive collection of luminaires, combining moving head profiles, beams and washes with static blinders and pars, makes for an impressive and versatile rig. It not only allows the venue to host all genres of music, but it means that the production values are so high that many performers are actively seeking the opportunity to play Rebar at the Dam’s stage.

“With the way that we’ve designed this system, using ADJ’s fixtures, we’re able to put on a show of any musical genre,” enthused Jeremy. “We can make the lighting very low key, for acoustic performances, and we can create really hi-energy effects, for dance music, and everything in-between. Being Nashville, we have a lot of country artists performing, but we’ve been booking hi-energy top 40 dance music on the weekends. We’ve also had ‘80s and ‘90s rock covers bands come in, which are very successful and have packed the house. We’ve brought in some R’n’B talent too, and have even had some of the very popular local bands perform – who normally only play much bigger venues – but have wanted to play Rebar at the Dam because of the technology we’ve put in. Before, we used to have to go out and seek bands to play. But after we installed the new lighting and audio system – that rivals anything in Nashville – bands are reaching out to us now, because they want to come and play on that stage. It gives theme concert-level production, like they’re playing Bridgestone Arena, but in an intimate bar setting!”

This just goes to show the impact the right lighting can have on a venue. Jeremy’s vision for installing the best production possible really paid off, as did his choice of fixtures thanks to a little insider knowledge. Not only did Jeremy have help from his team at Elite Multimedia and his lighting industry friends, but ADJ Rep Dustin Pesnell, President & CEO of Freed Sales, also provided invaluable product knowledge and assistance.

“Dustin is great,” Jeremy gushed. “He was in constant communication with me and helped me pick out the best fixtures for the job. He also pointed out a few things that I had left off the list that I would need to get the install done. The customer service I received, both from Freed Sales and ADJ, was wonderful. Everything worked great right out of the box. We didn’t have any issues with anything when we put it in and now, a six months later, we’ve still not had a single issue with any of the fixtures. And the lighting system gets used on a pretty much daily basis. So we really have had a very good experience with ADJ. ”

Even in these difficult times, when the bar has to remain closed, Rebar at the Dam’s lighting system is still in use. Performances are still taking place on the stage, but at the moment they are streamed online for people to watch at home, while the bar offers food and drink orders for collection. Which just goes to show, you can’t keep a good bar down.