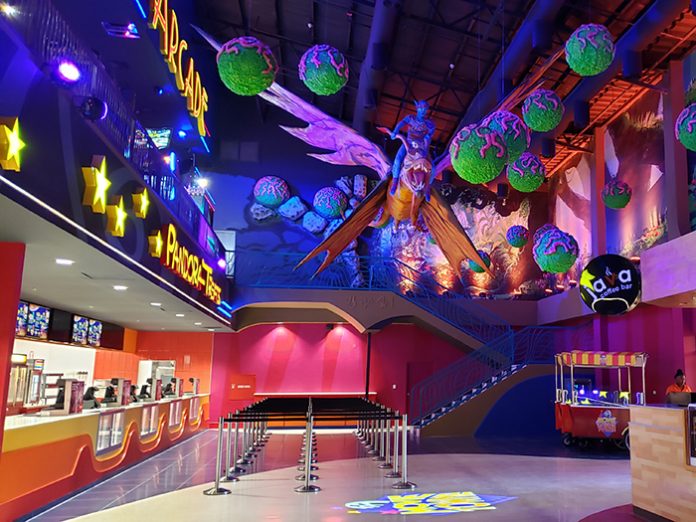 MovieTowne was a dream of Derek Chin back in 1999, but in 20 years the dream has manifested into a thriving empire of movie theatres and family entertainment spaces. Derek’s dream of high-quality entertainment spaces and movie theatres became a reality in November 2002 with the opening of the 10 screen MovieTowne Port of Spain. Over the years, steady growth called for the opening of the Chaguanas location (eight screens), Tobago (four screens) and San Fernando (nine screens).  Having grown up in Guyana, Derek, now Chairman, set his eyes on turning MovieTowne into a regional brand and bringing it back to his homeland.

With four locations now under its belt the MovieTowne group knew it needed to up its game, especially when launching in Derek’s hometown of Guyana. With a budget of US$40m assigned to the mall and cinema project, decisions were not being left to chance. Lighting specialists Streamline Systems were called in to work with the design team on a mythical world where dragons featured in the theatre’s lobby.

Michael Pereira, Director of Streamline Systems, took charge of the project and spent weeks bouncing ideas and concepts with Designer Roger Myers of Myers Design Services. Michael knew that the mythical world of dragons meant a no holds barred approach to the lighting and if there was an opportunity to light a lobby in far out colours this was it. Michael and the team were settled on Blizzard Professional’s EXA series which include RGBAW+UV LEDs for the ultimate in flexibility and the added pop of UV for those eerie dragons.

A total of sixteen Blizzard Professional Motif Sketch fixtures were used for powerful yet small fixtures which were hidden amongst the ‘bushes’ and artefacts in the lobby: “These fixtures really filled in the gaps and brought the venue together as a holistic environment,” said Michael. Blizzard Professional Motif Sketch feature seven 3W TRI-colour RGB LEDs.

While the independent DMX control of fixtures offers ample chases and movement, Michael wanted one last effect, a bit of a surprise which really caught everyone’s eyes. We installed two Blizzard Professional G-Mix 200 LED moving heads with custom made Rosco gobos of the MovieTowne logo. During different scenes the MovieTowne logo can be seen among the trees or moving gracefully across the lobby floor, often followed closely behind by a line of kids trying to catch it.

Being part of a wider mall project Michael and his team also incorporated lighting designs throughout the mall. Being charged with the design and project management of the mall’s lighting really gave the Streamline Systems team the ability to create a friendly atmosphere for shopping and restaurants, while still adding a pop of colour to the mall which ties back into the theatre.

Almost a mile of high-powered 120V, 120 LED tapelight was installed as cove lighting throughout the mall while Streamline added some colour to the mall’s lobby. The lobby is faced, front and back, with two large mural prints. The first wall measuring an impressive 71 ft by 35 ft and washed with natural light, making any artificial lighting a challenge. Streamline specified Blizzard Professional’s TOURnado Zoom fixtures. While the team knew that they won’t be able to achieve perfect coverage they took advantage of the zoom fixture to create an ever moving landscape of colour for a dynamic appearance. Blizzard Professional’s TOURnado Zoom features an IP65 rated fixture with 36 3W RGBAW LEDs and a motorized 10°- 40° zoomable lens. Just opposite was another feature wall, 38 ft wide by 16 ft high and sandwiched between massive windows and LED screens. Streamline again turned to Blizzard Professional and their Motif Vignette fixtures. A total of twenty fixtures were installed in a double line to ensure adequate brightness and chase control via DMX.

Flanking either side of the lobby’s three floors and between the focal walls, Streamline wanted to take advantage of the architectural columns and decided to illuminate the edges of these columns with RGB tapelight. With each column on each floor on its own DMX address, Streamline again took individual control of colour and movement tying the columns in with the focal walls all via touch screen control.