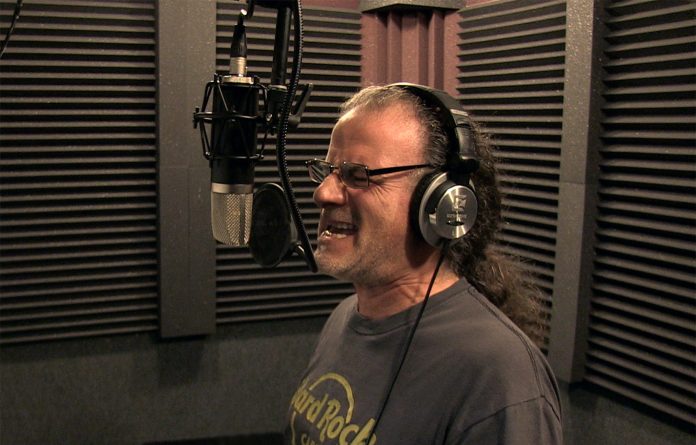 Blues/rock guitarist Billy Stokes recently released a new album titled Muscle & Blood. Influenced by his experiences both as a professional musician and from his service in the U. S. Army, the new album, recorded at Allusion Studios by engineer/producer and studio owner Jim Pavett features Frank Marino, Pat Travers, Les Dudek, Barry Sparks and Marc Storace of the Swiss rock giant Krokus along with other prominent musicians. Marc serves as the lead vocalist on the new album and to ensure the best vocal capture for the storied Maltese-born rocker, Jim used the MA-200 large diaphragm, vacuum tube condenser microphone from Burbank, CA-based Mojave Audio.

In addition to operating Arizona’s most highly advanced digital recording studio, Jim Pavett is also an accomplished musician in his own right. Jim has worked with numerous artists, including Alicia Keys, Cyndi Lauper and George Clooney. Additionally, he is a published writer and, as part of his enthusiasm for the latest technology also operates Pure Wave Audio, a sales and consulting firm for the Pro AV market. Jim discussed the challenges of the Muscle & Blood project as well as his enthusiasm for the Mojave Audio MA-200.

“I used the MA-200 on lead vocals exclusively to ensure the lead would stand out and remain distinct from the background vocals,” Jim explained. “Interestingly, my challenge was to overcome the stereotype of recording a rock vocal with a popular dynamic mic. Throughout my whole career, I have always used a large diaphragm condenser and tube mikes to record vocals and, after testing the dynamic mic and after experiencing its bizarre comb-like filtering EQ curve, I just don’t get why someone would like that sound. I had to reassure Marc’s team that we were taking an audiophile approach to this album and that the Mojave MA-200 offered a much better solution compared to a dynamic mike.”

When queried about those attributes that made the Mojave Audio MA-200 the ideal microphone for use on this project, Jim offered the following thoughts, “Recording Marc’s vocals was done toward the end of the tracking process for the entire album,” Jim reports. “All we had left was lead vocals, background vocals and solos. Knowing I was producing a guitar oriented rock album that had a lot of Marshall guitar tones on it, I knew I needed to pick a mic capable of creating the presence necessary to rise above all the music and have the lead vocal front and centre. Therefore, I chose the Mojave MA-200. With the MA-200, I can get the quality and character of a U67 microphone but with the added presence needed to pop through. Plus, the extra few dB of signal-to-noise ratio compared to what a U67 typically yields doesn’t hurt either. Marc was a trooper and knocked out sixteen songs in eight days. His stance would be an attack position and just unleash his unique voice on that mic hours at a time.”

During many projects, questions such as microphone positioning and related issues can occur, so knowing that a manufacturer provides responsive customer support services is crucial. In this regard, Jim is pleased with Mojave Audio’s support. “While I didn’t have any need to contact the company during the production of this record, I have used their services in the past,” Jim says. “David Royer (the company’s product designer) and Dusty Wakeman (Mojave Audio’s President) were great to deal with. They took care of me in a fast and expedient manner.”

With the new Muscle & Blood project completed, Jim offered these final thoughts on his experience with the Mojave Audio MA-200, “The MA-200 was a terrific choice for use on this project. The mic captured the energy and character of Marc Storace’s vocal beautifully. This was a much better solution than using a dynamic mic and everyone who has listened to the results has been impressed. The end result says it all.”