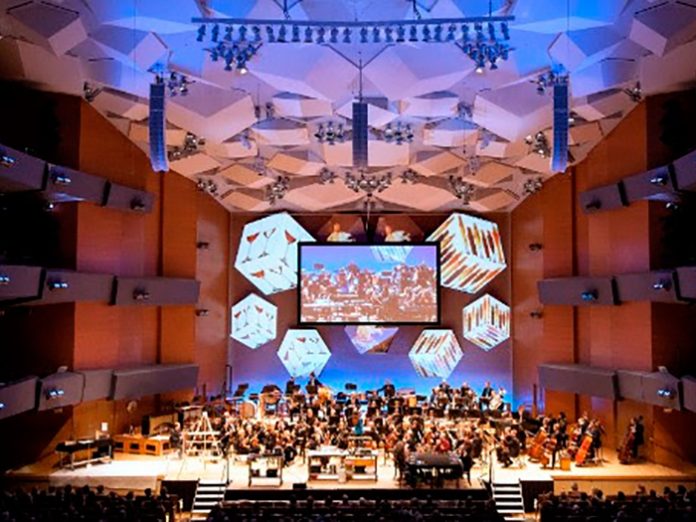 The 2,000-seat Orchestra Hall, opened in 1974, is home to the Grammy Award-winning Minnesota Orchestra, which celebrated the 112 anniversary of its inaugural performance at the beginning of November 2015. The hall, which completed a $52 million renovation in early 2014, has long been renowned for its acoustics, which were originally designed by Cyril M. Harris.

According to Joel Mooney, Technical Director, Minnesota Orchestra: “The acoustics are fantastic for the orchestra, which is the primary focus. But you also have to meet all the needs of modern music and productions. Technology has changed since the last time we remodeled the hall, so we took this opportunity to upgrade the sound system.”

The new L-Acoustics system comprises a LCR configuration of Kiva line array speakers together with SB15m and SB18 subwoofers, all of which are powered by LA4X amplified controllers. “We have 14 Kivas in the centre hang, which is primarily for speech and general classical reinforcement, and then we have 13 Kivas on the left and 13 on the right,” said Joel.

The left and right hangs are both topped by a pair of SB15m subwoofers to provide flown low frequency extension. Furthermore, a pair of SB18 single 18-inch subs are positioned behind a fascia created during the remodel below the stage lip.

Allied Audio Services of Grove Heights, Minnesota supplied and installed the L-Acoustics system after Joel and the staff did their due diligence. “We tried all the big names; the reason we chose L-Acoustics was because we felt it matched everybody’s desires, both the people in the audience and the technicians who come through our hall. The brand meets all riders,” he said.

“Andre Pichette, Head of Applications, Install, at L-Acoustics, has supported us from the beginning of the project – from comparative testing through to tuning to our standards,” said Joel.

The Minnesota Orchestra presents nearly 175 programs in a typical year, including screenings of classic movies accompanied by a live performance of the score. Because Orchestra Hall covers such a wide variety of programming, the system’s LCR configuration and ability to modify the position and number of speakers enables production staff to raise or lower the sound stage to match the production, said Joel. “In a movie scenario, sometimes it works great to keep the LCR way up high because the movie screen is up high. You’re hearing the orchestra, and there’s the movie-it’s almost a studio sound experience.”

In other applications, he continued: “You can have all three hangs at the ceiling and cover the entire room using true left-centre-right panning on your console.”

Conversely, the image can be brought to stage level while still providing coverage of the hall’s multiple tiers. “The other scenario is to leave the centre up high for coverage of the upper tiers, because it’s a long haul,” elaborated Joel. “The centre can cover tiers one, two and three, then you bring your left and right down out of the ceiling to cover tier one and the main floor, maybe even with a smaller box count. That brings the image closer to the stage.”

In a situation where a rock band is performing with the orchestra, he said: “The engineer really prefers to have the image down even lower. To achieve this, we can take the Kivas and stack them on top of subs on the far ends of the stage to lower the image. The Kiva system is very flexible, with smooth coverage and great clarity for everything from rock to classical to speech.”