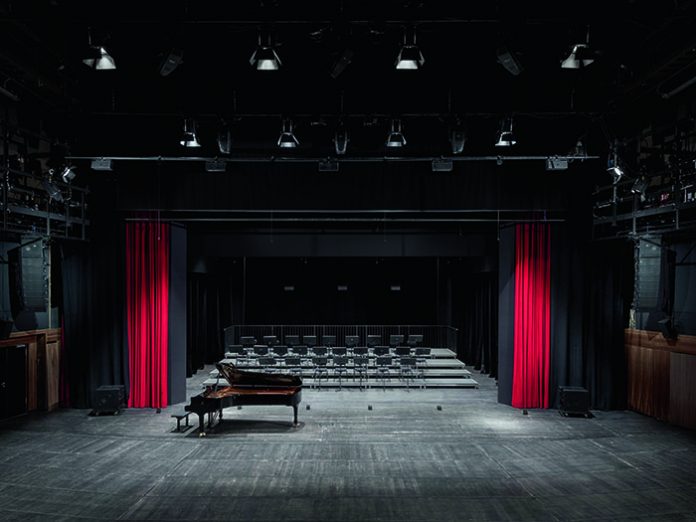 With seating for an audience of 465, the Forum is the principal performance venue for the Hochschule für Musik und Theater (University of Music and Theater) in Hamburg, Germany. Although it has hosted a full schedule of performances since opening in 1986, the auditorium had been hampered by problematic acoustics. Fortunately, thanks to funding from a national ‘Innovative University’ competition, the Forum was recently transformed into a world-class venue for both traditional and cutting-edge performances with the installation of a Meyer Sound Constellation acoustic system. Now with a simple tap on a touchscreen, acoustics can be optimised for lectures, dramatic theatre, opera, chamber music, or a symphony orchestra. The system also affords expanded opportunities for student experimentations in electronic music with dynamic 3D spatialisation.

Driving the transformation on behalf of the university was Professor Dr Georg Hajdu. “Interestingly, the Forum was originally designed for use with an active acoustic system,” he explained, “but for technical and financial reasons it never materialised. Later attempts to modify the somewhat unbalanced acoustics by mechanical means never gave satisfactory results.”

Prof. Hajdu was already familiar with Constellation, having experienced its capabilities nearly a decade before at the University of California in San Diego. “I heard a demonstration in their black box theatre and the room sounded wonderful and completely natural – until they turned off Constellation,” he recalled. “I was baffled.”

Later, during the planning stages for the Forum installation, Prof. Hajdu also heard systems at Meyer Sound in Berkeley and elsewhere in the Bay Area. “My impression was that the systems performed nicely in all contexts,” he said. “Also, I always trusted the strong research orientation of the company and I was reassured by visiting their facilities.”

For planning and construction supervision of both physical acoustics and Constellation electroacoustics, the university commissioned Graner + Partner GmbH of Bergisch Gladbach as a consultant. The firm was intimately familiar with Constellation, has partnered with Meyer Sound in 2017 on a system for the kING Culture and Congress Hall in Ingelheim.

“We started the project by first listening to some rehearsals and concerts before making any changes,” said Graner + Partner Project Engineer Dominik Schenke. “We found the acoustics were too dry for chamber and orchestral music, but too reverberant for speech, with an unpleasant colouration in the mid-frequency range. We prepared the hall for Constellation using mid-frequency absorbers to get rid of this odd metallic sound.”

Dominik then worked collaboratively with the Meyer Sound team, led by Constellation Project Director, John Pellowe, to finalise the design and engineering particulars. After the project was put to tender, the contract was awarded to Aveo Conference Systems of Wolfegg.

“A far-reaching infrastructure was put in place well in advance of the installation of 142 Constellation loudspeakers, two-line arrays, near field systems and subwoofers, 48 microphones along with 30 of our custom-made I/O boxes,” said Aveo Managing Director Wolfgang Huber.

“This enabled us to react quickly and precisely to the project requirements. Another critical point was the design of an easy-to-use touchpanel interface to allow the stage crew the safe operation of the Constellation system. Aveo’s programmers have implemented this challenge in the best possible way. It was a great pleasure implementing this special project as a collaborative team together with the university, Graner + Partner and Meyer Sound.”

Constellation’s small, self-powered loudspeakers are placed in overhead and lateral positions, with loudspeaker groups divided into separate zones in the hall and on the stage to create a unique blend of early reflections and late reverberations as appropriate for the audience and for the performers. Models installed include the full-range MM-4XP, UP-4XP, UPM-1XP, and UPJunior-XP as well as the MM-10XP subwoofer. The miniature condenser microphones are distributed throughout the space for capturing the ambient acoustics, with the desired acoustical signatures created by a D-Mitri digital audio platform with 22 modules, including four D-VRAS modules for hosting the patented Variable Room Acoustics System algorithm.

According to Prof. Hajdu, the Constellation system has greatly enhanced the acoustical flexibility of the hall while opening new avenues of creativity. “The applications range from a very subtle ‘coating’ of the acoustic sound to – for dramatic effect – turning the hall into a large cathedral. One of the most desired applications is the use of the Constellation loudspeakers as a multi-channel system for spatialisation of up to 96 sound sources. In combination with the LINA line array loudspeakers, the hall now sounds just spectacular.”

As an example, he cites a concert presented in January, which gave an overview of the hall’s new audio and acoustic capabilities, together with the enhancement from a new LCD wall. “We used the system to recreate the sound of the church pipe organ in our organ studio. We used a 7.1 Holophone microphone and streamed the multichannel audio and video over a digital network to the Forum. This was a striking experience, with many in the audience finding it hard to believe this all took place in real-time.”

Consultant Dominik Schenke also attended several opening performances. “The acoustics of the hall benefited enormously from the conversion and the Constellation system,” he said. “We heard a piano concert with beautiful chamber music acoustics, and then a choir that was wonderfully sustained by long reverberation. A theatre piece was performed with different acoustics appropriate for every scene, and the 3D audio functions were showcased with experimental electronic music. The sound for the musical performances was warm, enveloping and transparent, while speech was direct and clearly intelligible.”

In addition to opening new creative possibilities on campus, the Constellation system affords opportunities to collaborate via high-speed Internet on experimental music projects with other Constellation-equipped institutions worldwide, including the University of California at Berkeley and Monash University in Melbourne, Australia.

Founded in 1950, Hochschule für Musik und Theater is one of the leading public universities for the performing arts in Germany. It is located at the prestigious Budge-Palais in the Rotherbaum district of Hamburg.